Academy Award-winning actor and vegan activist Joaquin Phoenix attended a vigil for Regan Russell, an activist who was killed outside of a Toronto pig slaughterhouse.

The actor joined more than 100 people at Farmer John’s slaughterhouse in Vernon, California, last Thursday evening. The group paid their respects to the beloved activist who was killed on June 19 while attending a pig slaughterhouse protest outside of Fearmans slaughterhouse. Russell was run over by a transport truck that was delivering pigs to the facility.

Phoenix held a sign that read: “#SavePigsForRegan.” He stood beside his friend and fellow activist, Michelle Cho. She held a sign with the message: “Rest in Power Regan.”

He added: “While her tragic death has brought upon deep sorrow in the Animal Save community, we will honor her memory by vigorously confronting the cruelties she fought so hard to prevent by marching with Black Lives, protecting Indigenous rights, fighting for LGBTQ equality, and living a compassionate vegan life.“

The Animal Save Movement hosts vigils outside of the Burlington slaughterhouse to witness and document the pigs’ suffering. Activists give the pigs water, which Russell was doing moments before she was killed.

“Regan was a kind, elegant, strong, and courageous person,” Anita Krajnc, founder of the Animal Save Movement, wrote in a post on the Toronto Pig Save Instagram.

“She was a mentor to others, and she always did activism with kindness in her heart,” she added. 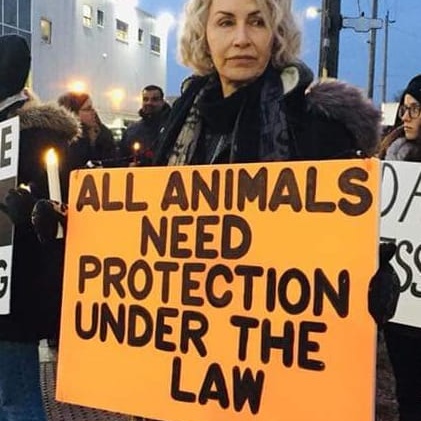 Sixty-five-year-old Russell was a prominent figure in the Toronto animal rights community.

She recently worked to prevent the passage of ag-gag bill 156, which criminalizes whistleblowing on factory farms. However, lawmakers passed the bill two days prior to her death.

On June 18, just one day before she lost her life, Russell shared a post on Facebook. It read: “Bill 156 has passed. Now, anytime an animal is suffering on a farm in Ontario, no one, not even an employee, has the right to expose it. This decision is evil. Animal ag is evil. Cancel animal agriculture.”

In his statement, Phoenix said: “The Ontario government can attempt to silence us with the passage of its Ag-Gag bill—Bill 156. But we will never go away and we will never back down.”

“My heart goes out to the Toronto Animal Save community and to Regan’s lifelong partner, Mark Powell,” he added.