Vegan power couple Joaquin Phoenix and Rooney Mara just partnered with Beyond Meat to give plant-based meals to vulnerable communities during the pandemic.

The plant-based meat company launched the Feed a Million+ campaign last month. The new program provides “access to good, nourishing meals at no cost” to those in need.

The company pledged to donate and distribute more than one million vegan Beyond Burgers to food banks, hospitals, community centers, and other organizations working on the frontline.

“We’re so grateful to partner with Beyond Meat’s Feed a Million Campaign to support individuals and communities experiencing food insecurity,” Phoenix said in a video shared by The Hollywood Reporter.

Mara continued: “For the next several weeks, the Feed a Million campaign will be donating hundreds of hot meals to some of our favorite organizations that provide emergency services to so many people.”

Free vegan meals will go to Phoenix and Mara’s selected organizations: Midnight Mission, a charity that aids those experiencing homelessness; Urban School Food Alliance, which promotes the need for healthy school meals; and My Friend’s Place, which assists people between 12 and 25 in transitioning out of homelessness. 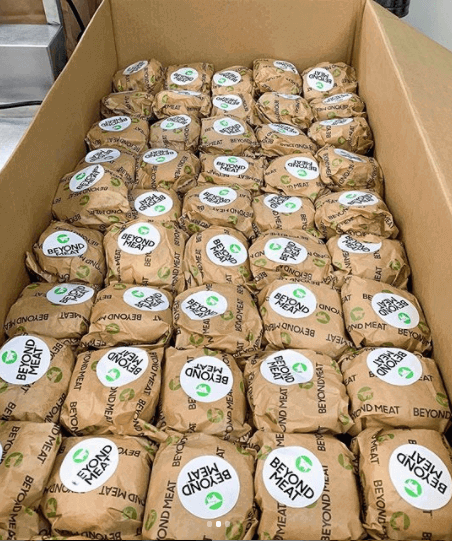 Beyond Meat’s new initiative is called Feed a Million+. | Beyond Meat

Phoenix and Mara are the latest celebrities to join the Feed a Million+ cause. Lindsey Vonn, Kevin Hart, Ashanti, and Karlie Kloss are also ambassadors for the campaign—just to name a few.

Kevin Hart announced he had joined the campaign in a video uploaded to Instagram. “I want to give a shoutout to […] Beyond Meat. You guys are unbelievable, feeding over a million ppl right now through these crazy times…. I love that you stepped up,” Hart said in the video.

He added: “I want to do my part as your partner… so I will be sending meals today and tomorrow to Northridge Hospital in California.”

Snoop Dogg is also an ambassador for the campaign. The rapper wrote on Instagram: “Beyond Meat has made a pledge to donate over one million Beyond Burgers to those in need during these challenging times.”

He added, “I’m proud to be a part of it.” Snoop Dogg selected Martin Luther King Jr. Community Hospital in Southern Los Angeles as his organization of choice.