The award-winning vegan actor has partnered with animal law advocacy organization Animal Legal Defense Fund (ALDF) for its “Report Animal Ag” campaign. According to ALDF, the initiative provides an online tip portal—ReportAnimalAg.com—that industrial animal agriculture workers can use to report situations of abuse.

“Despite the animal agribusiness industry’s flagrant disregard for worker safety as COVID-19 ravages slaughterhouses, a surge of whistleblowers—under the constant threat of employer retaliation—are coming forward with information about the mass killing of animals and disposal practices that have severe environmental implications,” Phoenix said in a media release.

According to the Centers for Disease Control and Prevention, 19 states have reported confirmed cases of COVID-19 among workers in 115 meat and poultry processing plants. Of the approximately 130,000 workers employed at these facilities, 4,913 cases and 20 deaths occurred due to coronavirus.

Slaughterhouses Are Breeding Grounds for COVID-19

ALDF points to the cramped working environments as one reason the outbreak has been so prevalent in slaughterhouses. Confirmed cases of COVID-19 have caused a number of processing plants to close or reduce operations. Some of the biggest meat companies shut down plants following outbreaks earlier this year. These include Smithfield Food Inc., Tyson Foods, Cargill Ltd., National Beef Packing Co., and JBS.

In order to deal with the surplus in animals, the USDA recommends depopulation—the mass killing of animals on factory farms. The USDA’s suggested methods included blunt force trauma or foam to suffocate chickens, for example.

“The animal agriculture industry doesn’t want the public to see operations when everything is ‘business as usual,’ much less conditions during a pandemic,” ALDF’s Executive Director Stephen Wells said.

He continued: “Workers are putting their lives at risk for corporate bottom lines. We want them to know they can report illegal or dangerous conditions anonymously and we will take appropriate action.” 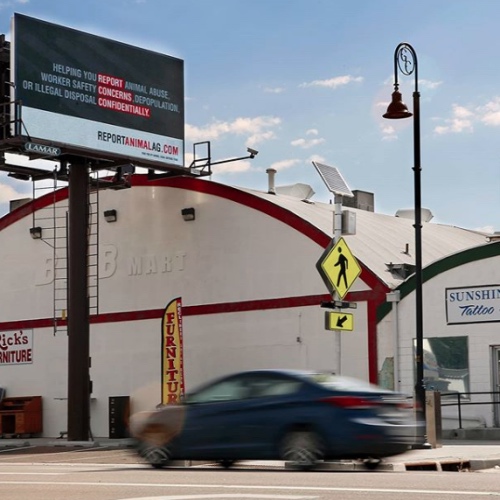 ALDF erected billboards as part of the campaign. | ALDF

ALDF also erected a series of billboards, in English and Spanish, near slaughterhouses across the US. The billboards feature the text: “Helping you report animal abuse, worker safety concerns, depopulation, or illegal disposal confidentially.”

“Whistleblowers are instrumental in helping animal protection organizations identify, investigate, document, and expose cruelty. ReportAnimalAg.com provides a safe space for employees to confidentially, and with anonymity, voice their concerns. Our billboards will be raised near factory farms and slaughterhouses across the country,” Phoenix explained.

This isn’t the first time Phoenix has voiced his support for animal rights. He—along with his fiancée, Rooney Mara—exposed the horrors of factory farming amid the pandemic in a Washington Post op-ed in April.

“Less notorious but much more commonplace threats to public health are the ‘concentrated animal feeding operations’ (CAFOs). [They are] scattered throughout the South and Midwest,” the couple wrote.

“These factory farms warehouse thousands of animals that wallow in their own waste with limited or no airspace. [This] routinely [creates] conditions for the proliferation of superbugs and zoonotic pathogens,” they added.