“Joker” star Joaquin Phoenix may be the anti-hero on the big screen, but in real life, he’s a legitimate superhero for animals.

The longtime vegan is appearing in a new animal rights campaign for PETA (People for the Ethical Treatment of Animals) targeting speciesism. PETA timed the campaign launch around the release of the highly anticipated “Joker” film, which arrives in theaters early next month.

“We are all animals,” reads the new campaign poster with the tag “End Speciesism.” Phoenix appears in the image with a chicken whose eye is positioned just over his so that both eyes appear aligned.

“When we look at the world through another animal’s eyes, we see that inside we’re all the same—and that we all deserve to live free from suffering,” Phoenix says. 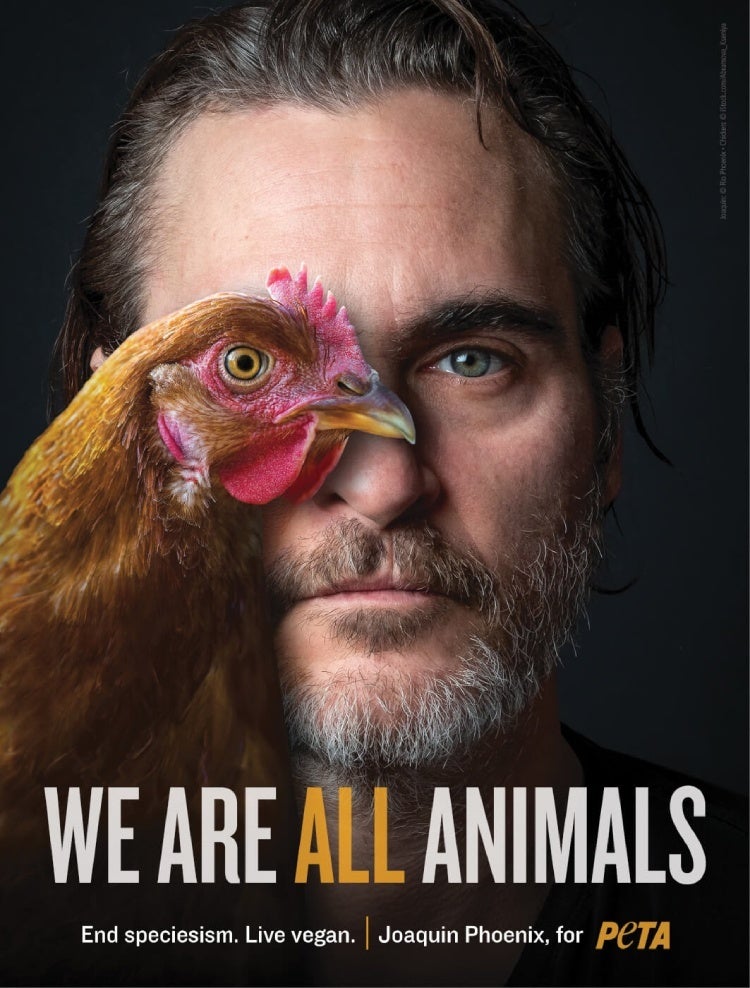 Campaigning for the Animals

Phoenix has worked with PETA on a number of campaigns over the years including exposing cruelty in the wool industry, the horrors of fishing, and China’s controversial dog leather industry, which he called “the worst thing I’ve ever seen.”

PETA says the new ad will appear on a Times Square billboard in New York City. More than 300,000 people pass through the area daily.

The Academy Award nominee has appeared in a number of animal rights campaigns. Most recently, he lent his support to a BeFairBeVegan campaign inside Toronto’s subway system. Just hours before he accepted the Toronto Film Festival’s Tribute Actor Award, Phoenix was in Toronto’s subway system posing in front of posters calling out speciesism.

“In addressing our speciesist attitudes toward other animals, BeFairBeVegan encourages us to consider that our core similarities are far deeper than our surface differences. Now, more than ever, the world needs to hear this message,” the campaign noted.

Phoenix was raised in a vegetarian household. By age 3, he went vegan. And he consistently uses his name and star power to support animal rights issues. In May, he led a National Animal Rights Day protest alongside his fiancé and fellow vegan, actress Rooney Mara. Both Phoenix and Mara helped narrate the pivotal 2019 documentary “Dominion.” Hailed as the scariest movie ever made, the film details animal exploitation across Australia.