The organizations posted photos of the new print campaign on its Instagram account. The campaign features two billboards and three bench ads. “Our billboards and bench ads are up!!! The timing isn’t great since the world is on lockdown,” LA Animal Save said on Instagram, “but we can still make an impact by sharing on social media!”

The two billboards feature a photo of Phoenix at one of the organization’s pig vigils. The billboards feature the message: “Save Animals, Go Vegan.” The new billboards are located near Lento Market and Farmer John’s slaughterhouse where the vigils take place.

Two tandem benches featuring photos from a pig vigil are located in front of the Black Cat Bar in the trendy, walkable Silver Lake neighborhood of Los Angeles. They include the messages “Choose Kindness, Go Vegan” and “The Truth About Bacon.”

The third bench is located in front of Echo Park Boxing and shares the latter message. 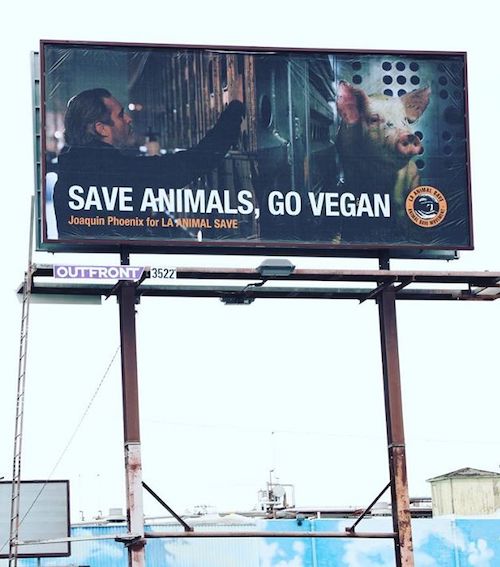 Oscar winner Joaquin Phoenix is the face of a new vegan ad.

LA Animal Save and Animal Alliance Network both host weekly pig vigils at Farmer John’s slaughterhouse in Vernon, California. Transport trucks filled with pigs stop outside of the slaughterhouse for two minutes. Activists provide comfort and water to the pigs on their way to slaughter. Phoenix is a regular attendee of LA Animal Save’s weekly vigils.

The actor made headlines in January after he attended a pig vigil following his SAG award win for Outstanding Performance by a Male Actor in a Leading Role for his work in “Joker.”

Other regular celebrity attendees at the pig vigils include musician Moby and vegan activist Genesis Butler.

LA Animal Save holds its vigils on Sundays from 7 to 9 pm. Animal Alliance Network’s weekly vigils occur on Wednesdays from 8 to 11 pm.

Both organizations announced the cancellation of all vigils through the end of March due to the coronavirus outbreak and state recommendations for social distancing.