Judd Legum, founding editor-in-chief of political website ThinkProgress, has announced that he is trying to go vegan.

In a tweet, the editor claimed that he was going to try vegan for a week and asked if anyone had any advice for him to help him transition. Legum joins many other people trying veganism this January with over 100,000 people signing up for Veganuary, a campaign that gives people the resources and support they need to go vegan. 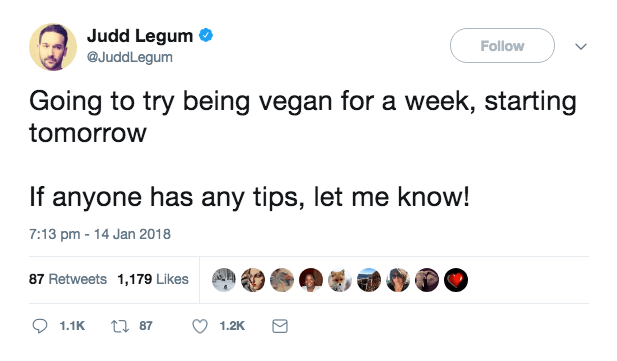 According to the website, Think Progress is ‘dedicated to providing our readers with rigorous reporting and analysis from a progressive perspective,’ and reports issues of social justice, politics, policy and culture and the intersections between them. As veganism gains momentum and many people equate the dietary choice with an act of social justice, it’s no surprise that those whose jobs involve uncovering social inequalities would look to try veganism.

Veganism is becoming easier than ever to try, with an increasing number of alternatives appearing on supermarket shelves and many eateries including more vegan options or an entirely vegan menu.

Legum has been vegetarian for more than 15 years and says he’s ‘trying something new.’ Many of his followers have given him advice and recipes to help him make the switch.