Whether you’re a die-hard fan of childhood favorite film 1967’s The Jungle Book, a parent who has sat through viewings of Walt Disney films one-too-many times or just a keen Melbourne foodie – an upcoming event is sure to ring a few bells.

Remember a scene from The Jungle Book – ‘Mowgli’s Marvellous Feast’? Well, seven Melbourne chefs have teamed up to create a seven-course-strong vegan rendition of it, to be held at The Vincent in late November (Wednesday 22nd November at 6.30pm, to be precise).

According to My Guest List, this upcoming feast is intended to “explore and highlight the potential of modern vegan cuisine”. The best part – everything is designed for guests to immerse themselves into a truly The Jungle Book inspired evening. The foods will even match the vegan-friendly alcohol they’ll be serving.

Each of the chefs will design a course for the international-flair, to create a course of nostalgic degustation. Dylan Kemp, Abby MacGillivray, Pierre Guyot, Christian Abbott, Tim Fowler, Nicholas Hollands and Jake Furst have been named as the chefs in charge of the food and menu affairs, which will no doubt make guests relive fond childhood memories. 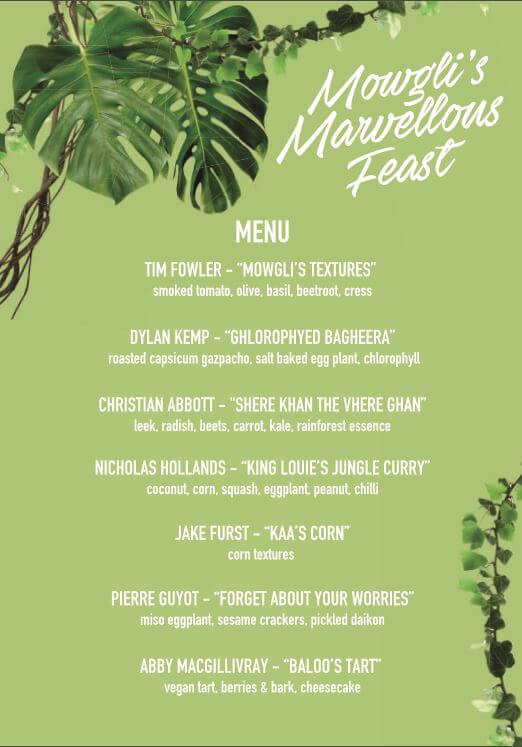 The Vincent’s Venue Manager Tish Walker said: “We’ve had a huge amount of interest in the event already, I think people are really excited to try something a little out of their comfort zone”.

She adds, “It’s also an exciting concept because of the way we are working with multiple head chefs, each devoted to a single course. There’s going to be some spectacular results”. With, “Mother Nature’s recipes”, this feast is set to be anything but “worries and strife”.

Melbourne’s Albert Park is home to The Vincent, a historic hotel where Mowgli’s Marvellous Feast will take place. For $95 pp, tickets are being snatched up like the DVD’s store last copy of The Jungle Book.

While the event doesn’t mention a mandatory karaoke session of “The Bear Necessities” – who could pass down an opportunity to belt out Disney songs in public? If you’ve forgotten, don’t worry – “they’ll come to you”!