In a recent Washington Post article, co-writer and executive producer Colin Trevorrow drew parallels between the fifth installment in the “Jurassic Park” film franchise and the way animals are treated by humans. “We have a relationship with animals on this planet that is tenuous and is strained. They suffer from abuse and trafficking and the consequences of our environmental choices,” said Trevorrow.

The new movie picks up three years after 2015’s “Jurassic World.” A dormant volcano on Isla Nubar, abandoned since the previous film’s events, is about to erupt, threatening the lives of the cloned dinosaurs. Dr. Ian Malcolm (Jeff Goldblum) believes the impending death of the creatures is nature’s way of correcting the mistakes of the park’s creator.

However, not everyone agrees with Malcolm. Claire Dearing (Bryce Dallas Howard) forms the Dinosaur Protection Group and campaigns to save the dinosaurs – a plan that is rejected by the federal government. Dearing and Owen Grady (Chris Pratt), along with a motley team, then take it upon themselves to rescue the dinosaurs.

“To find a way to build essentially a children’s franchise about how we have a responsibility to the creatures that we share the planet with, felt like a worthwhile thing to do,” Trevorrow continued.

On their rescue mission, the crew runs into trouble with poachers who seek to profit from the vulnerable creatures. This aspect of the plot creates a metaphor for animals such as rhinos, elephants, pangolins, orangutans, and others who have been exploited to near-extinction by humans. 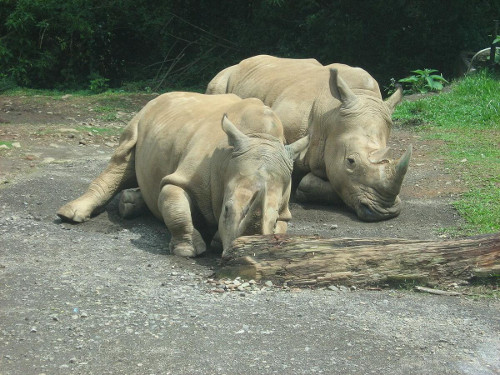 “We looked at real animal trafficking in the world and what that process is,” Trevorrow revealed. “First, there’s capture and then there’s going to be an auction of some kind, a sale. We were following something that felt grounded in the reality that we know. It’s a rule that we have that we don’t want the dinosaurs to do anything that real animals wouldn’t or couldn’t do.”

The film also caused Trevorrow himself to speculate about the ethics of using technology to revive the white rhinoceros, a species that was hunted en masse for its horn – a highly prized black market commodity. “If we did have this technology, if we could bring back the white rhinoceros, do we have a responsibility to do it,” he asked. “I don’t personally know the answer to that.”

“Jurassic World: Fallen Kingdom” is in theaters across the U.S. on June 22.