‘Launching JUST Egg is a major milestone and we’re thrilled to have Aramark as one of our first global foodservice providers to help us expand our reach and further our mission in bringing food that’s not only delicious but healthier and more sustainable to a larger audience,” JUST co-founder and CEO Josh Tetrick said in a statement.

The plant-based JUST Egg, which is made from mung beans, is free from cholesterol and uses 80 percent less water than conventional chicken eggs. It also boasts 5 grams of protein per serving compared to 6 grams of protein per egg. Additionally, the JUST Egg is a kinder alternative to the egg industry, which forces hens to lay repeatedly eggs in often unliveable conditions until their bodies can no longer keep up with production standards.

Since its launch, the JUST Egg has been a hit with consumers. Within a week of its launch, the company reported that it had outsold conventional chicken eggs in select grocery stores. At a Florida pop-up event over the summer, a vegan breakfast sandwich made using the high-protein plant-based egg drew long lines of customers eager to try. At New York City-based vegan grocery store Orchard Grocer, is struggling to keep the JUST Egg on shelves due to its popularity. 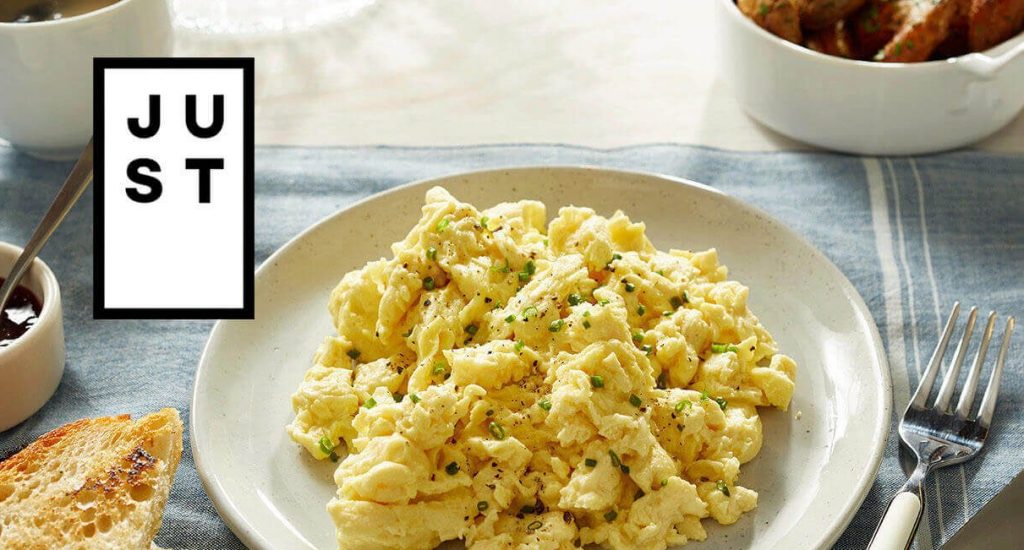 Aramark hopes that including the JUST Egg in its offerings of innovative vegan products from new brands, including tomato-based Ahimi tuna from Ocean Hugger Foods, will help meet the rising demand for plant-based food among its consumers. According to a recent survey, 80 percent of Aramark’s customers want more vegan food options while 60 percent said that they are interested in “plant-forward” dishes. The interest reducing or completely eliminating consumption of animal products isn’t exclusive to foodservice diners – across the nation, omnivore consumers are the primary customers that are boosting sales of vegan food in restaurants and grocery stores.

“As part of our commitment to developing healthier and sustainable menus, we’re continuously looking for new ways to bring-to-market innovative products,” added Aramark product development lead Heidi Hogan. “Expanding our menu offerings to include JUST Egg further speaks to our promise to deliver healthy recipes that not only feature quality ingredients, but taste good, too.”

The JUST Egg Breakfast Patty will be available to consumers for a limited time at select corporate and hospital cafes and college campus food courts, managed by Aramark, beginning October 22.