Bay Area food tech startup JUST will be the first major manufacturer to bring a ready-made “folded” vegan egg to market. The frozen egg is made with the company’s signature mung-bean protein base used in its popular liquid vegan egg.

Stores across the U.S. will begin carrying the vegan egg in April. Whole Foods Market will be among the first to launch the egg. Mainstream supermarkets including Albertsons’ Safeway stores; Gelson’s Markets in Southern California; Stop & Shop in the Northeast, Kings Food Markets in the New York metro area, and Giant Martin’s in the Mid-Atlantic, will also carry the egg, the company said in a statement. It will also see more foodservice placement. The JUST vegan egg patty is already being served at select Tim Hortons locations in Canada. 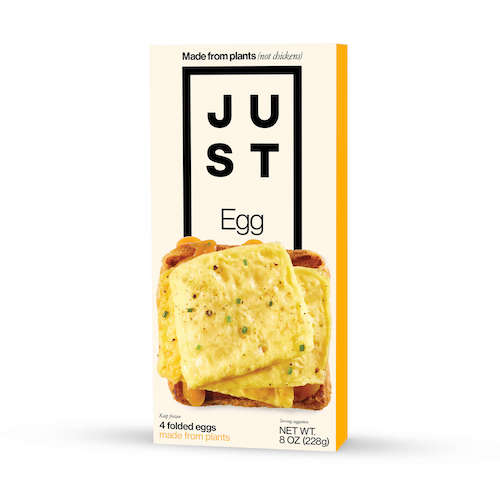 The folded vegan egg is launching as the company hit a milestone with its liquid egg in 2019. It sold the equivalent of more than 20 million chicken eggs since its mainstream launch last year. The JUST vegan egg is now the best-selling liquid egg product in the U.S.—beating out conventional liquid egg products found in most supermarkets.

“2020 is the year that our work to build a world-class technology platform and compelling brand is being realized,” Josh Tetrick, co-founder and CEO of JUST, said in a statement. “It’s humbling to see the overwhelming response to our team’s hard work.”

The new folded vegan eggs come in a box of four. Like the liquid vegan egg, it’s free from cholesterol. It contains about as much protein per serving as a traditional chicken egg. According to JUST, the new vegan egg is non-GMO, egg-free, dairy-free, and has no artificial flavors. It uses 98% less water, 83% less land, and emits 93% less CO2 than conventional animal protein.

JUST is also announcing a price reduction on its vegan egg products. It says the price drop will be reflected in both retail and foodservice. The drop is a result of “increased efficiencies in sourcing, protein processing, and manufacturing.” The company, which recently announced the launch of a new factory in the Midwest, is aiming to make its vegan egg “one of the lowest-cost and most sustainable proteins on the planet.”