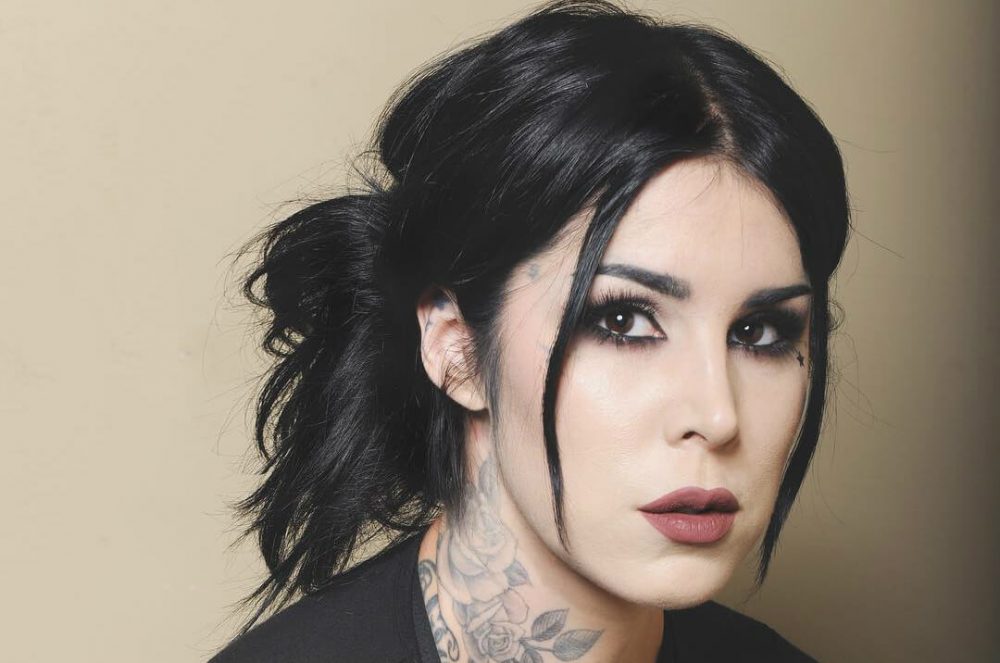 Beauty entrepreneur Kat Von D has made, yet another, cruelty-free, fashion-forward move. In a post on social media, the star showed off an all vegan leather outfit, revealing to fans that she intends to wear the pieces at several upcoming concerts.

Kat Von D shared a photo of the ensemble to her 6.5 million Instagram followers this morning. The celebrity said that she is “getting ready to put this to good use”. Specifically, onstage with rock band IAMX at their shows in London, Paris and Madrid. Von D recently announced that she will be performing alongside the band in March and singing songs from their new record Alive In New Light.

According to Von D, the vegan lace-up boots were created by designer Natacha Marro, who has made shoes for David Bowie, Lady Gaga, Björk and Scarlett Johansson, among others.

The outfit’s gloves and bolero were created by fashion company Majesty Black. While the business is not a vegan one, Von D recently collaborated with the brand. Von D can be seen on Majesty Black’s Instagram modelling a “very special pair of Vegan Opera Gloves”.

Getting ready to put this to good use on stage w @IAMX in London, Paris, Madrid! ❤️ All #vegan leather! •gloves+bolero by: @majestyblack •lace-up boots by: @natachamarro

Kat Von D is no stranger to the world of vegan beauty; the American entrepreneur, tattoo artist, activist, model and musician recently launched the ‘first ever’ vegan long-lasting liquid eyeliner. Prior to this, the Kat Von D Beauty line released 40 new vegan and cruelty-free lipsticks, as well as vegan makeup brushes, which are made without the use of animal hair.

In February this year, Von D also announced 28 unique styles of vegan shoes that will feature in her upcoming footwear line. All of the new products will be created using “beautiful, innovative, and sustainable fabrics” that are, of course, cruelty-free.

These pursuits have certainly not gone unnoticed. Kat Von D Beauty recently claimed the title of Best Cruelty-Free Cosmetic Company for the second year in a row.

Von D isn’t the only celeb opting for vegan leather. Musician and vegan Bryan Adams recently shared images of his own vegan leather shoes. Additionally, Zayn Malik has been praised by PETA for his ‘eco-leather’ fashion pieces, which use leather made from plant products rather than animals. Even Ryan Gosling has been spotted in a vegan leather jacket in the recent Blade Runner 2049 film.