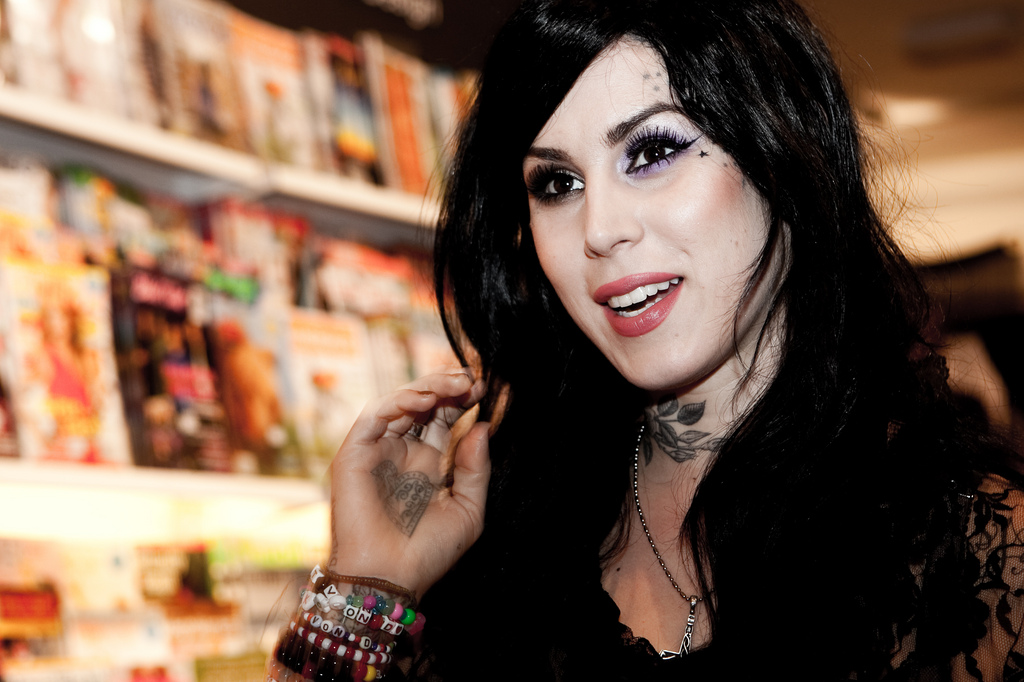 It has been announced that Kat Von D is set to appear in upcoming vegan documentary ‘Taking Note’. However, the documentary is currently only a few hours away from the end of it’s crowdfunding campaign and without donations, Von D will not be gracing our screens for what’s set to be a great documentary.

The documentary is the dream of Chris Hines, who his the founder of music publication Hit the Floor Magazine (HTF). Hines, who is himself a vegan, initially turned to vegetarianism after watching a music video featuring graphic slaughterhouse footage. The documentary aims to look at examples of vegan celebrities and musicians and educate people on the ways in which the celebs live their lives. Hines hopes that others will be inspired by their favourite musicians, as he was when he watched Goldfinger’s “Meet Your Meat” music video. Hines’ film will also look at the positive impacts that a vegan diet can have on the world including the environment and human health.

Kat Von D is a musician, model and entrepreneur who is best known for her work as a tattoo artist. She first found fame after appearing on the TV show LA ink in 2007 and has since started her own brand of make up and her own clothing line. Herself a vegan, Von D is currently in the process of ‘veganising’ all of her make up products and labels all her vegan products with a ‘vegan alert’.

Von D is known to be incredibly outspoken about her views on animal rights and recently slammed cosmetics company NARS for going back on their word about animal testing. She will make a fantastic addition to Hines’ line-up for the film which already includes artists from Fall Out Boy, Enter Shikari and The Veronicas plus an interview with Shaun Monson, director of Earthlings.

Hines has been vegan for over two years now and is one of the main organisers of the animal rights group Devon Animal Save who organise activism events across the country. He also visits colleges and universities to give talks on veganism and runs his own YouTube Channel. Hines has experienced success with his online music magazine and promised himself that he’d use it to do some good in the world and this documentary is part of that.

If you want to see the wonderful Kat Von D alongside other inspirational vegans in this documentary then head to the crowd funding page and donate what you can to this awesome project!