American actor Kate Mara may be best known for her onscreen roles in “House of Cards,” “24,” and “American Horror Story,” but her most transformative roles? That may just be her offscreen work with chimpanzees and becoming a mother.

As our closest living relative, we share a lot with chimps, including about 99 percent of our DNA. Like human mothers, chimpanzee moms play an important role in the lives of their offspring. According to the Jane Goodall Institute, chimps care for their babies, they guide them, teach them, and support them.

But chimp moms face many threats, including bushmeat poaching, deforestation, and scientific research. Threats that can leave their offspring fighting for their lives alone.

In Liberia, on the West African coast, there are 59 chimpanzees that have lost their most treasured guardians.

Mara first found herself in Libera in 2016, three years before she gave birth to her own daughter with husband and fellow actor Jamie Bell. She was visiting Liberia Chimpanzee Rescue & Protection—an organization that has become close to her heart over the last few years. 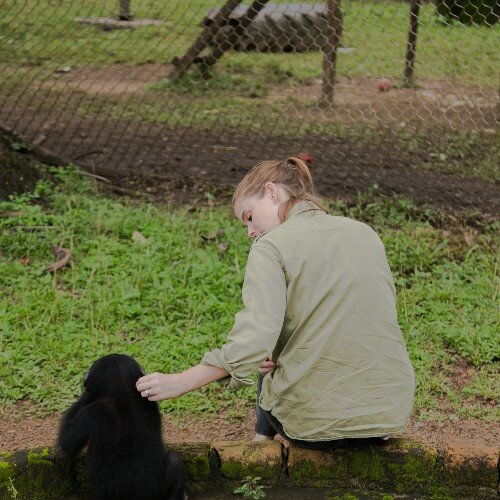 ‘Their Lives Did Depend on Them’

Wildlife veterinarian Dr. James Desmond and conservationist Jenny Desmond had just uprooted their lives to help 66 abandoned orphaned chimps. They had been used in research and then dumped without any food, water, or veterinary supervision.

The Desmonds went out to stabilize the situation but ended up getting into much more, Mara tells LIVEKINDLY. “It didn’t take long for word to spread among the locals that The Desmonds were there helping chimps,” she said. “They began receiving knocks at their door from people seeking help.”

The actor explained that people were turning up with messages of traumatized baby chimps who needed help.

These babies “clung to Jimmy and Jenny as if their lives depended on it. I’ve seen it firsthand. And their lives did depend on them,” recalls Mara.

The Desmonds, and Mara too during her visit, stepped in where the chimps’ mothers could no longer. And it’s turned into quite the project, with no chimp turned away.

“Today, the Desmond’s are permanent residents of Liberia,” says Mara. “[They are the] guardians of 59 orphaned chimpanzees.”

‘I Have Always Felt a Strong Connection With Animals’

The Desmonds are Mara’s heroes; the couple has built a multi-structure sanctuary on protected land, employed dozens of locals, and educated children about chimp protection. Their work is featured in a BBC documentary called “Baby Chimp Rescue,” which has aired in the UK and will be coming to the US soon.

On top of all of this, the Desmonds frequently work with Liberian officials to rescue and confiscate chimps from the pet trade.

A trade that, needless to say, Mara passionately opposes. “It is never okay to keep a chimp or any other exotic animal as a pet,” she says. “A good rule of thumb is, if an animal’s natural environment isn’t just left off the gas station off the highway, they shouldn’t be there and nor should you.”

That goes for all wild animals, including tigers. Mara has partnered with Gabriela Cowperthwaite, the director of 2013 SeaWorld expose “Blackfish” and the Animal Legal Defense Fund on a petition to pass the Big Cat Public Safety Act in the U.S.. The federal law would essentially ban roadside zoos from common activities like cub-petting and breeding.

Mara’s compassion extends to all animals. Seeing factory farms in the flesh for the first time prompted her to make the change to a vegetarian diet. She was driving back to New York after 9/11 through Pennsylvania and she saw chickens “forced to live in tiny, crowded cages.” Ten years later, In 2011, she made the switch to veganism.

“I have always felt a strong connection to animals,” she said. “That said, we were raised eating chicken and fish and I didn’t know anything about where the meat came from. I didn’t know anyone who was a vegetarian, let alone vegan, so that choice wasn’t something I ever considered until I was 18.” 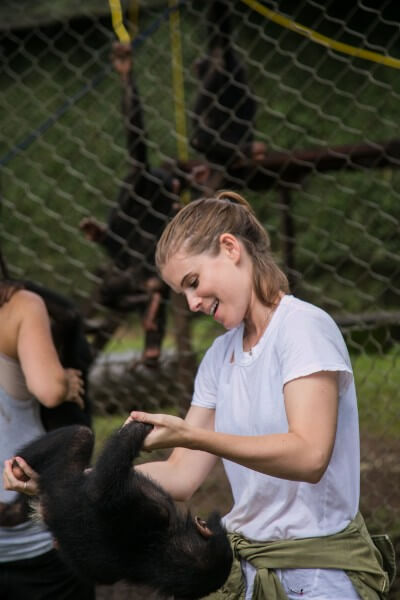 Kate Mara is cautiously optimistic about the future.

Her connection with animals has influenced her own motherhood journey, both with her baby girl and her stepson. “I feel so lucky to have the privilege now to raise my daughter vegan and to have honest conversations with her, and my stepson, about where the food they choose to consume comes from,” she says.

Her stepson, who is 7, has chosen to no longer eat meat when staying with his dad and Mara. Bell isn’t vegan, but has taken to plant-based cooking throughout the lockdown, says Mara. He hasn’t eaten meat in four months.

Mara believes quarantine, among other world issues, may have influenced others to make lifestyle changes, too.

Covid-19 is a zoonotic disease, but the pandemic isn’t the only threat facing humanity. The climate crisis is looming large. According to the Food and Agricultural Organization of the United Nations, 14.5 percent of global greenhouse emissions come from animal agriculture.

A growing body of research confirms that animal products aren’t ideal for our health. Processed meats like bacon and sausages are classified as a Group 1 Carcinogen by the World Health Organization. That’s the same category as tobacco and asbestos. Red meat is classed in Group 2, which means it’s “probably” carcinogenic to humans.

All of this is changing consumers’ mindsets. Mara says, “I believe that the state of our world right now is forcing more people to discover the health benefits and the environmental benefits of eating a plant-based diet.”

For Mara, it was Kimberly Snyder’s “Beauty Detox Solution” that opened her eyes to the health benefits of plant-based food. The book focuses on how what you eat can be your most powerful beauty product, impacting the condition of your hair and skin, as well as how you feel on the inside.

“I am cautiously optimistic that it will be a much more common lifestyle in the future,” she notes. “But we have a long way to go.”

The answer to changing more people’s minds? Conversation and awareness, says Mara. “I believe most people just don’t know the facts and the horrors of what actually happens to the animals they end up eating,” she says. Honest conversations around the dinner table and in the school classroom could change how people view the food on their plate. 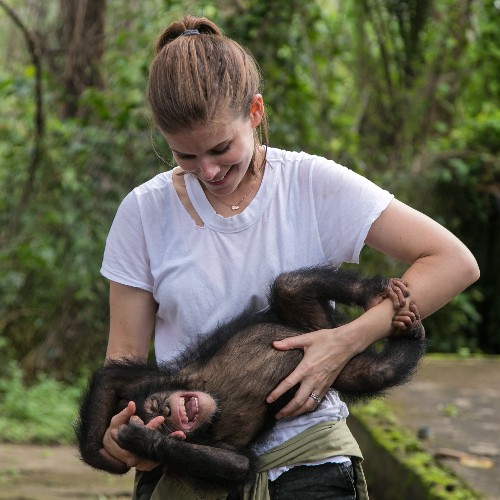 Mara’s vegan ethics have influenced how she chooses to feed her daughter. But how she understands her and who she is? Some of that comes from the chimps in Liberia.

The actor visited the country again in 2018, “in awe” of what the Desmonds had achieved. She remembers that visit with fondness and nostalgia when she looks at her little girl. “I am constantly telling my husband she reminds me of [the chimps],” says Mara.

“She moves like them, plays like them, clings to me in the same way, has very similar needs and desires. Almost identical,” she notes. “This shouldn’t be a surprise, as we share about 99 percent of our DNA with them, but seeing it first hand was exciting and makes me miss my friends in Liberia that much more.”

As her daughter grows up, Mara intends to pass on what she has learned from the Desmonds and the chimpanzees they care for. “They will forever be true heroes of mine,” she says. “Their self-sacrifice and unwavering dedication to the animal kingdom embodies everything I seek to mirror in my life.”

To find out more about the Liberia Chimpanzee Rescue and Protection, see here. According to Mara, they need donations, likes and shares on social media, and a little bit of positive energy too.