For British vegan musician Kate Nash, the last decade has been a wild ride. The singer-songwriter released her hit single “Foundations” in 2007, which peaked at number two in the UK. The following year, Nash was nominated for three BRIT Awards, taking home the title of best British Female Solo Artist.

Fast forward to today and Nash shows no signs of slowing down. The Dublin-born, London-raised musician has spent the last few months touring around the UK, selling out shows and packing festival tents. This week, she appears in Los Angeles at Vegan Fashion Week. Next year, she will play multiple shows in Germany. 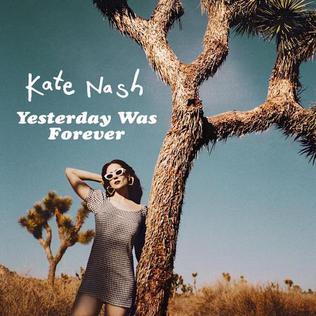 Music With a Message

Her most recent album, “Yesterday Was Forever,” marks Nash’s fourth studio album. It saw the songstress return to her indie-pop roots and explore the theme of mental health. Speaking about the decision to address mental health through art, Nash told LIVEKINDLY, “It comes really naturally to me as I’ve been talking out loud about these things since I realized I had mental health issues. I didn’t realize I had them until I was about 24 and so I think certain decisions in my life could have been made better if I had maybe known about them.”

She adds, “I hope someone out there could learn from what I consider to be my mistakes. And also feel less alone and less shame. I want to help normalize it. It can truly save lives.”

Mental health isn’t the only issue Nash wants to explore through art. She recently released a track titled “Trash,” which may be one of the songs 2019 needs most. The song centers around plastic pollution and is an unignorable reminder that once plastic is produced, it stays on our planet for a long, long time. The song takes place in a world where “it’s too late” and “plastic rules the Earth,” Nash says.

Nash penned the song after she was invited to partake in an art exhibition about the overuse of plastic.

“To be honest what inspired me to be part of the whole thing is the despair that I feel when I see the Amazon burning or the trash island in the ocean and how overwhelming that is,” the musician says. “We’ve done a lot of damage to the planet and being able to put my feelings about that into my songs is a way of trying to spread a message of awareness.”

She unites policial messages with emotion to make her music more relatable. “The way we treat the planet reminded me of ways I’ve let myself be treated in relationships. Once you realize your worth you can accept more love into your love and positivity, I hope we can realize the Earth’s worth and treat it with more love,” she says. 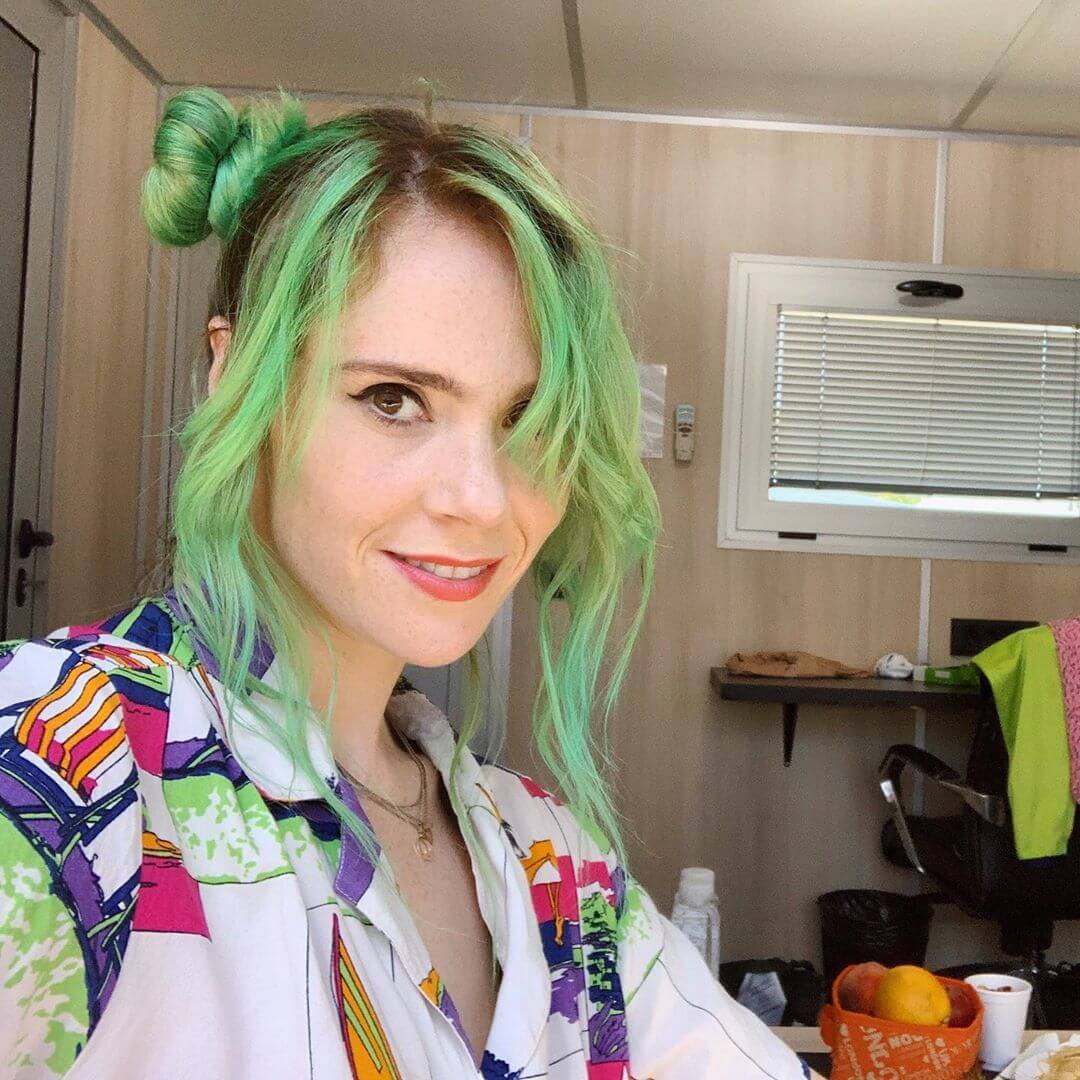 Kate Nash says being vegan gives her a sense of peace. | @katenash

Being Vegan Provides a ‘Sense of Peace’

This focus on the environment aligns with Nash’s plant-based diet. She believes veganism is important in the fight against the climate crisis, given animal farming’s impact on the planet. Animal production generates more greenhouse gas emissions than the world’s total transportation sector. It also requires huge amounts of land and water.

“The production of farming all animals is damaging the planet. The feed and grain that these animals consume, the toxins that come from farming, what it’s doing to the land and the air, how we’re messing with these animals’ natural habitats, behaviors, patterns, their health and ecosystems,” Nash says, adding that all mass production is harmful to the planet, “so we should all be downsizing in general.”

Nash first went vegan two-and-a-half years ago. She was vegetarian for eight years prior to that. “I think I ignored what I knew about the dairy industry for a while. But I noticed myself really turned off whenever I tried to eat eggs or dairy leading up to that, I was starting to see it for what it was,” the artist says.

The 2017 film “Okja” was a catalyst for her going vegan. The film tells the story of a girl raising a genetically modified super pig whilst exploring themes of greed and compassion. “I was crying on the sofa and looking at that imagery at the end of the movie where you see the thousands of super pigs and I remember saying out loud, ‘Ok I get it.’ And I’ve been vegan since then,” Nash says.

She explains that while there are “so many reasons” to be vegan, her initial motivator was to protest against the farming industry. “The mass production of animals is just so disgusting to me,” she says.

For Nash, making the leap to veganism boosted her mental state in ways she hadn’t imagined. “My favourite thing about being vegan is honestly that it’s the most kind way to live. It gives me a sense of peace and self-worth. I feel like everything is better for me mentally,” she explains.

But the benefits go beyond her mental state. “Physically I feel stronger and cleaner inside, with no hormones and toxins of a living thing being processed by my body it can work better in so many ways. I feel so healthy. More focused and energized,” Nash says.

“The idea of eating an animal product once you have cut them out just feels wrong and strange, it’s like you clean out your system internally and then see it for what it is,” she adds. 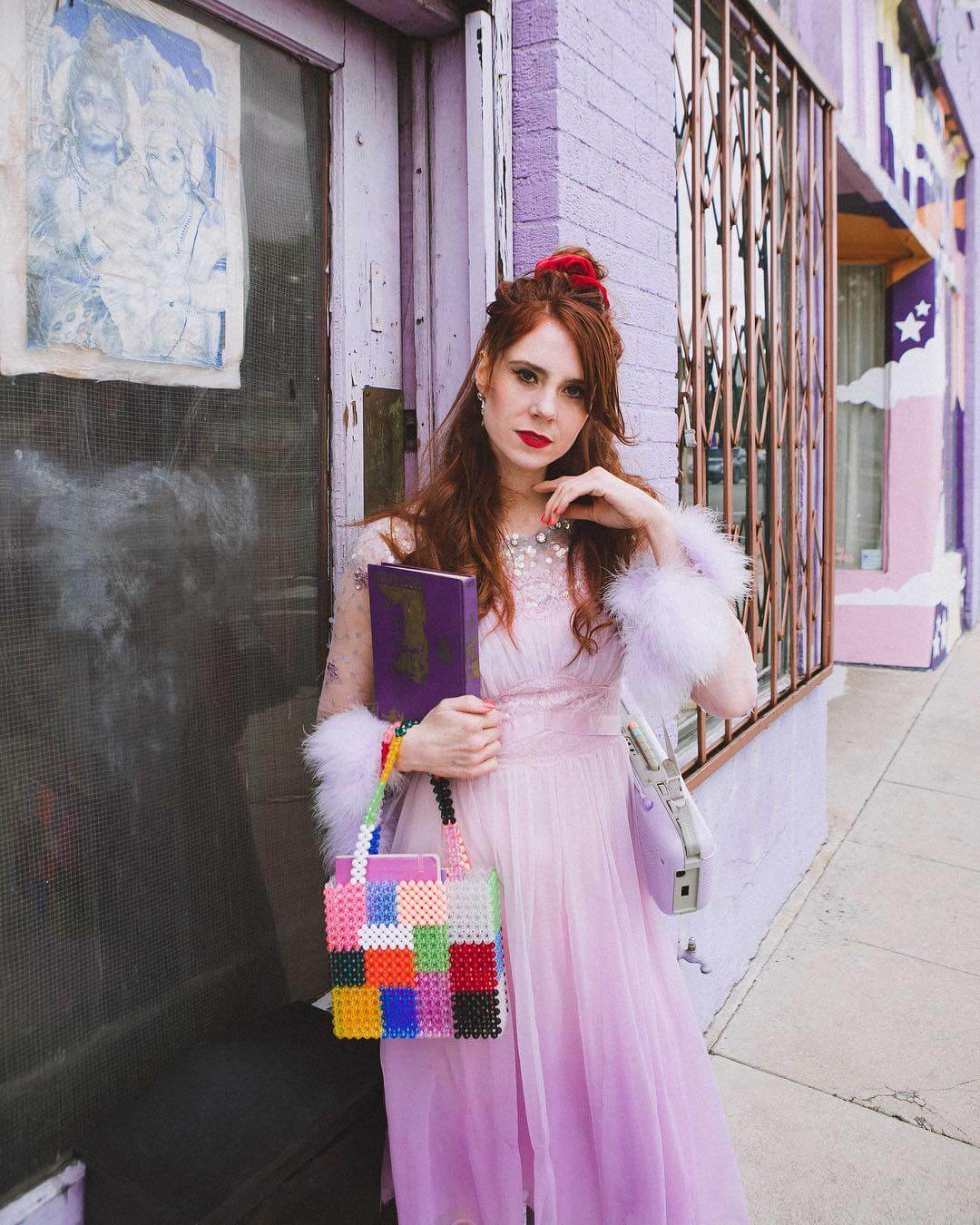 Kate Nash believes fashion is a form of self-expression. | @rubyjune

‘Fashion Should Always Be Fun’ (and Ethical)

Nash’s passion for veganism has led to her hosting the Awards Night & Fundraiser at Vegan Fashion Week (VFW), which is on from October 10 to 15 in LA. LA could be considered a haven for vegan food-lovers. It’s home to Little Pine, a restaurant owned by vegan musician Moby. Little Pine has won the heart of environmentalist actor Leonardo DiCaprio with its Mediterranean plant-based cuisine. Restaurant Au Lac DTLA plates up creative vegan food with a nod to Asian cuisine. Think: Cali Rolls, with nori sushi, avocado, and tamari sauce; Claypot Fish, made with soy fish, eggplant, and caramel sauce; and Mai Bánh Mì, featuring shredded tofu, soy pork, and vegan mayonnaise.

VFW is LA’s latest nod to the cruelty-free movement. The event will follow the theme of “Fashion is Activism” and look at the ties between climate change and the fashion scene. VFW will also explore ethics, science, technology, legal matters, and creativity.

Nash believes the fashion scene will only become more sustainable and that this trend will be led by artists, musicians, and young people. “The younger generations are going to continue to become more aware and evolve to take care of the planet better simply because they will have to, to survive,” she says. “The future of fashion is ethical and then the rest is up to the individual.”

Nash turns to a handful of people for fashion inspiration, including Edie & Edith Beale, Divine, Annie Oakley, Carrie Bradshaw, David Bowie, and Courtney Love. The inside of Nash’s childhood jewelry box, the Halloween costume store, and the spirit of Christmas also get a mention.

More creators are cropping up in the vegan fashion space. Nash is a fan of Emma Brewin (“she makes the most amazing hats, they are fluffy dreams!”). She adds, “I also love House of Sunny and Koi footwear! I’ve very interested in where mycelium and apple leather is going to take fashion as well.”

Fashion is a form of self-expression, according to Nash. “Fashion should always be fun in my opinion and an expression of yourself in a way that either makes you comfortable or feel more confident and wild. Whatever that means to you,” she says. “My interpretation of that is fashion should always have a sense of humor. I wear stuff that makes me laugh! Life’s too short.”

Vegan Fashion Week takes place at the California Market Center in Los Angeles from October 10 to 15. You can get tickets here.