International cereal brand Kellogg’s is adding vegetables to its cereal for the first time in its 113 years.

The new Raspberry, Apple and Carrot Granola, which contains no added sugars, combines crunchy oat clusters with dried fruit and veg. It’s also free from animal ingredients, as indicated by a green “Vegan” logo on the front of the box.

“Creating a granola with a vegetable was a balancing act,” cereal inventor for Kellogg’s UK, Sarah Bulfield, said in a statement. “All sensory aspects had to be taken into consideration; texture, colour, and most importantly flavour. The sweetness from the apple and the sharpness of the raspberry is all balanced with the earthiness and subtle sweet notes of the carrot pieces.” 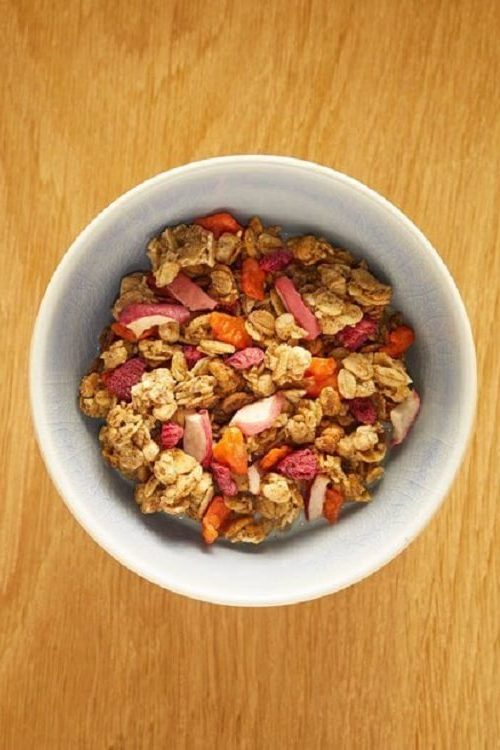 The Kellogg’s team has spent the last 12 months working on the new granola in the Manchester food lab in order to expand its sugar-free options. Although carrots are an unusual choice, the brand noted that the vegetable has been used in sweets since the 16th century, when carrot cake was first invented.

The vegan cereal is part of the brand’s W.K. Kellogg range; other options include Wholegrain Wheats, Apricot and Pumpkin Seed Granola, and Cranberry, Sultana, and Spelt Granola. For every box of cereal from the range, Kellogg’s donates 10p to programs that provide breakfast to people in need and to projects that support sustainable farming practices.

The range caters to the rising demand for plant-based products in the UK, but also for healthier options. Vegetables and other plant-based ingredients are increasingly showing up in unexpected forms, such as dessert hummus and vegan avocado ice cream.

There are also a number of other vegan-friendly cereals available throughout the nation, such as Weetabix, Nestlé’s Shredded Wheat and Shreddies, and Tesco Pillows and Cinnamon Squares.

Kellogg’s may be looking to further expand its vegan offerings. At the Good Food Conference last September, Nigel Hughes, Kellogg’s SVP Global R&D said “This is a paradigm shift…Plant-based protein will play a much, much larger role than it plays today.”

The Raspberry, Apple and Carrot Granola will launch in major UK supermarkets later this year.