(Updated September 9, 2020) | After filmmaker Kevin Smith almost died from a massive heart attack in 2018, his only daughter, Harley Quinn, tried to convince him to adopt a plant-based diet for his health. After ditching meat and dairy, Kevin saw massive improvements in his health. In just six months, Kevin managed to drop more than 50 pounds and his blood pressure returned to normal levels. Fast forward to 2020 and Kevin—still vegan—says he feels better than ever. To help teach others about the benefits of veganism, the dynamic father-daughter duo have launched their very own podcast.

Dubbed Vegan Abattoir, it aims to debunk common misconceptions about a plant-based diet. During the show, conceived and hosted by Harley Quinn, and featuring her famous father as co-host, the father-daughter duo answer “vegan-curious” questions they get from non-vegans.

Kevin, who provides the podcast’s health-centric perspective to veganism, says cutting meat and dairy from his diet saved his life. He says the morning after his heart attack, his nutritionist told him he had high cholesterol. “Obviously, that’s what almost killed [me],” he says. He adds: “So you know, the nutritionist explained the benefits of a plant-based lifestyle and Harley kind of seized on that moment. And so I said: Well, I’ve eaten the way I want to eat for 47 years, I will try your way for a couple of months.”

Kevin says making the transition to a vegan diet was easy, particularly because of his daughter. “She was my guide. Without Harley I never would have went vegan. I wouldn’t have even went vegetarian,” he said. 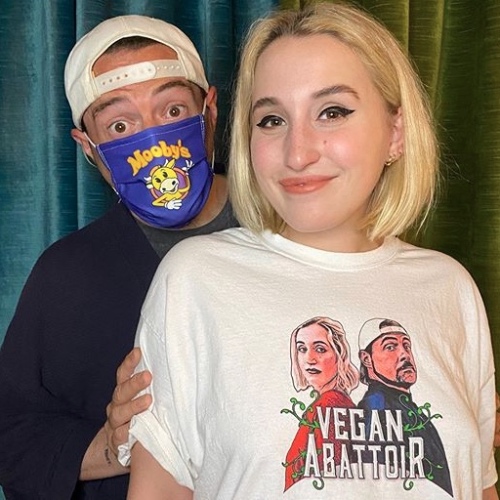 The filmmaker and his daughter launched a vegan podcast. | Kevin Smith

While Kevin went vegan for his health, Harley Quinn ditched meat and dairy for the animals.

“My mission is about saving my own damn life,” Kevin explains. “And Harley’s mission is saving the lives of animals first and foremost, then people after that—but animals first,” he adds.

Harley started out as a vegetarian and went vegan four years ago. She says she wants to inspire others to do the same. “There are very few people that are able to go cold turkey into veganism. A lot of people have to start with vegetarianism,” she explains.

Once she removed meat and dairy from her diet, she realized that she also had to cut out animal products from other areas of her life—such as leather from her clothing and cosmetics that were tested on animals. “It’s a long journey. But you can’t be too hard on yourself because you do kind of realize more and more every day how much society has made animal cruelty a very normalized part of life,” she continues.

The duo have covered a wide range of topics on their podcast, including cruelty-free cosmetics, animals in entertainment, and Harley’s recent COVID-19 scare. They’ve also had a number of vegan guests, including musician Toby Morse, actor Daniella Monet, and ultra-athlete Rich Roll. And Harley says she’s got her eyes on Lizzo next.

“She’s been posting videos of her cooking vegan meals on TikTok and Instagram,” Harley says. “And I think that it’s so great because she does have such a large following, especially with young people. She’s gonna really, positively influenced so many.”

Listen to the Vegan Abbatoir on Apple Podcasts.