Filmmaker Kevin Smith is officially opening a real-life version of the fictional fast-food joint, “Mooby’s,” featured in Smith’s films. The menu will have vegan options.

The vegan actor took to social media to announce the launch of a Mooby’s pop-up.

“Now the folks who did “Saved by the Max” [are] building the Mooby’s pop-up—an IRL eatery in Los Angeles that opens later this year, pandemic depending! But as a preview of what’s to come, a Mooby Meal will be available for delivery in L.A. via Postmates starting THIS SUNDAY and running til 4/25,” Smith said on Instagram.

According to a Mooby’s Instagram post, takeout meals will include Mooby’s Messy Lasagna Sandwiches (regular or vegan) with a side of “Hater Totz” and “Chocolate Covered Pretzels” for dessert! The meals will also feature a special toy surprise—an autographed Reboot card from Smith.

The filmmaker says the Reboot card will “entitle the bearer to front row slots when the pop-up is finally open to the public.”

Proceeds from Mooby Meals will be donated to No Us Without You to provide meals to families affected by COVID-19. 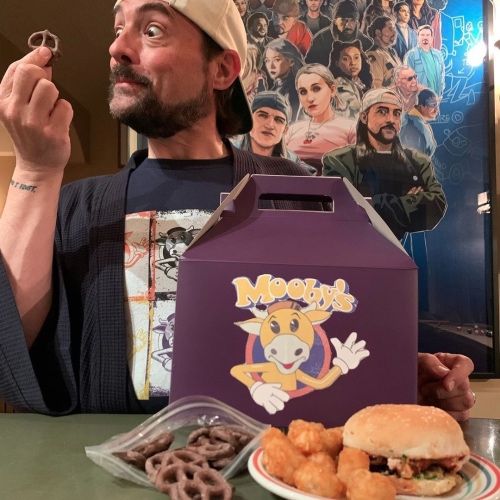 The real-life version of Mooby’s will feature a plant-based menu. | Kevin Smith

Mooby’s is featured in a number of Smith’s films, including the 2019 movie “Jay and Silent Bob Reboot.” Mooby’s has turned into somewhat of an icon in its own right, and is loved by fans of the Smith Cinematic Universe.

Smith previously talked about how important it was to him for the restaurant to serve only  vegan food. “I’m [hoping] that one day, one day, some like rich investor’s just like, ‘I would like to open a Mooby’s.’ Like, awe, could you imagine?” he said last May. “He would have to be vegan, though.

The director loves a bit of vegan junk food, even once driving three hours to his nearest Veggie Grill while filming “Supergirl” for CW in Vancouver. He also stocks his fridge with plant-based “bleeding” Beyond Burgers. In fact, he enjoys the patties so much, he hopes the Beyond Burger would be on the menu at the vegan version of Mooby’s. 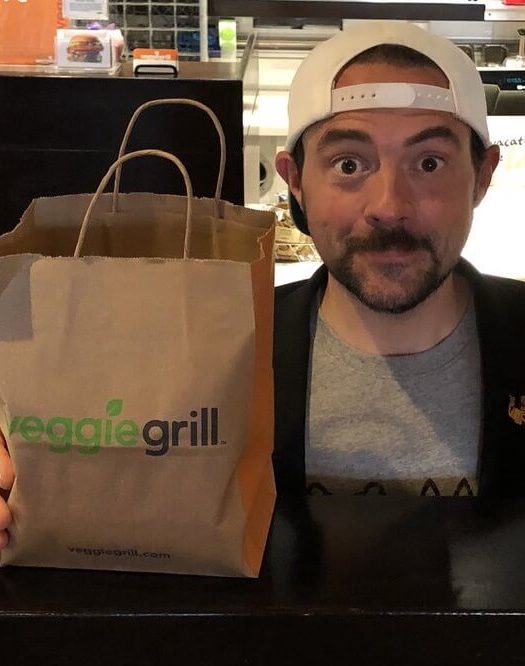 Smith once drove three hours to get Veggie Grill.

Smith has just celebrated two years of being vegan. He decided to change his diet after surviving a serious heart attack, which left him fighting for his life in hospital. Since then, he’s become a keen advocate for plant-based living for health reasons, but he has also discovered ethical veganism and often stands up for animal rights.

In 2018, just before Thanksgiving, he appeared in a video for Farm Sanctuary, asking people to consider avoiding turkey over the holiday season.

He said in the video, “You’re always told by older people it’s OK to eat animals, we’re supposed to eat animals. And, you know, for a long time, that’s what my generation believed. Now we know a lot better.”