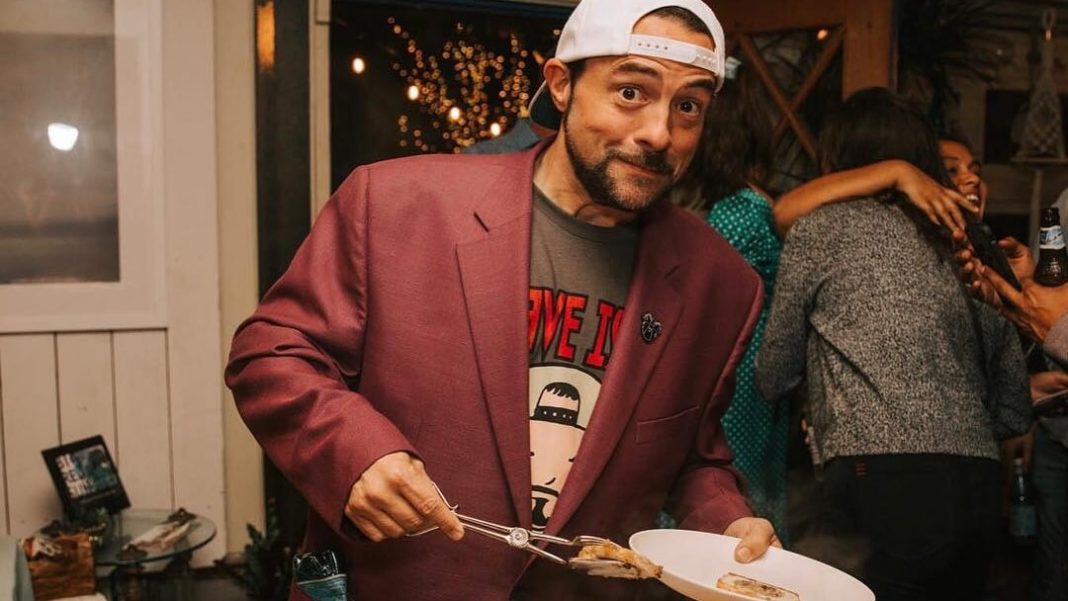 Smith adopted a vegan diet earlier this year after suffering a major heart attack. Smith’s daughter, actress Harley Quinn Smith, is a longtime vegan and encouraged her dad to make the shift.

Soon after his recovery, Smith began regularly posting to Instagram and Twitter about his love for Veggie Grill’s food.

The chain specializes in comfort classics with a vegan west coast twist. Smith seems to be particularly fond of the chain’s vegan Beyond Burger sandwiches.

? Our #Friendsgiving last night was a blast to say the least! Big shout out to @thatkevinsmith for joining us for the evening, what a GREAT surprise and thank you to ALL of our guests for previewing our VG Holiday Feast! ??? Guys, our feast is still available for Pre-Order until 11/17! Feeds 4 adults and it’s delicious ?? Feast on Friends! Link in bio for feast details.

Earlier this year Smith paid a fan in Chicago to bring him a bag of takeout from Veggie Grill as he didn’t have enough time between flights to make it to the restaurant and back. He paid the fan $200 and took a photo with him at the airport.

While filming on location in Vancouver, Smith reported to his fans that he made a six-hour round-trip drive to Seattle to load up on Veggie Grill food despite Vancouver’s booming vegan scene.

And, it seems, the shift to the vegan (Veggie Grill) diet has not only helped him to lose weight and restore his health after the heart attack, it’s helped him to have a change of heart about animals, too.

Most recently the filmmaker appeared in a video for animal rights organization Farm Sanctuary along with his daughter and several turkeys.

“You’re always told by older people it’s OK to eat animals, we’re supposed to eat animals. And, you know, for a long time, that’s what my generation believed. Now we know a lot better,” Smith said.

“I would just like to apologize to both these ladies for the amount of their forefathers and mothers that I’ve put away,” he said, addressing the turkeys. “But you have my solemn word ladies, I will never eat another turkey. And I will go out of my way to see that others might not as well.”