KFC is developing lab-grown chicken nuggets made from real animal cells and plant-based ingredients in Russia.

Raisa Polyakova, General Manager of KFC Russia & CIS, said in a statement that “crafted meat products” are part of KFC’s “restaurant of the future concept.”

“We are glad to contribute to its development and are working to make it available to thousands of people in Russia and, if possible, around the world,” she said.

Animal agriculture accounts for 14.5 percent of global greenhouse gas emissions, according to the Food and Agriculture Organization of the UN. The lab-grown nuggets will be more sustainable than traditional chicken. This is because it eliminates the steps of raising, transporting, and slaughtering hens for food. It is also more ethical than factory farming: the lab-grown meat production process is slaughter-free. 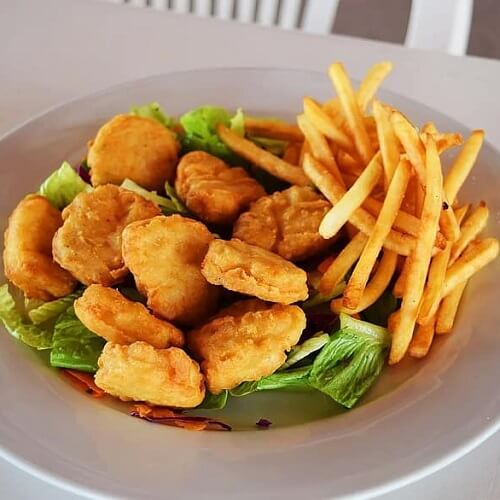 KFC is working with a Russian bioprinting company to develop lab-grown chicken.

“3D bioprinting technologies, initially widely recognized in medicine, are nowadays gaining popularity in producing foods such as meat,” said Yusef Khesuani, co-founder and Managing Partner of 3D Bioprinting Solutions. He added that the partnership with KFC will “help accelerate the launch of cell-based meat products on the market.”

This is not the first time the Russian company, which opened in September 2013, has aided in creating cell-based food. Last year, it provided California-based cultured seafood brand Finless Foods with a bioprinter in order to create 3D structures made from real fish cells on the International Space Station (ISS). Israeli startup Aleph Farms also used 3D Bioprinting Solutions technology to print cow muscle tissue on the ISS.

While the ambition is to launch the world’s first lab-grown chicken nuggets, California-based brand JUST has a head start. The company, known for JUST Mayo and the JUST Egg, has been developing slaughter-free chicken for a number of years. CNET reporter Lexy Savvides, who tried JUST’s lab-grown chicken nugget in March 2019, said that she “was pleasantly surprised at how similar the cultured chicken itself tasted compared to the real deal.”

Outside of the biotechnology lab, KFC has been dabbling with meat-free options. UK locations launched a vegan chicken burger earlier this year. In the US, the fast-food chain has been working with California-based brand Beyond Meat to make “Beyond Fried Chicken,” plant-based chicken nuggets that mimic the texture of whole muscle meat. The initial one-day trial took place at an Atlanta location last summer. It has since expanded to the Charlotte and Nashville areas and in 50 Southern California stores. KFC has also trialed vegan chicken in Canada, China, and Hong Kong.