KFC announced it will be closing all of its U.K. and Ireland locations amid the COVID-19 coronavirus outbreak.

The fast-food giant made the announcement on Twitter. “As of today, we will begin closing all our restaurants in the UK and Ireland. Stay safe,” the company tweeted.

The tweet was accompanied by an image that read: “KFC you later. We’ve decided, together with our franchise partners, to begin closing our restaurants to help protect the wellbeing and safety of our teams and of our guests.”

KFC said it is working hard to ensure no food is wasted.

“Over the coming days, we’ll find safe and efficient ways to distribute any unused food — which will include working with our longstanding Food Donation Scheme partners to make sure we’re giving to those who need it most.”

The company said its U.K. and Ireland locations will all be closed by Wednesday, March 25 until further notice. 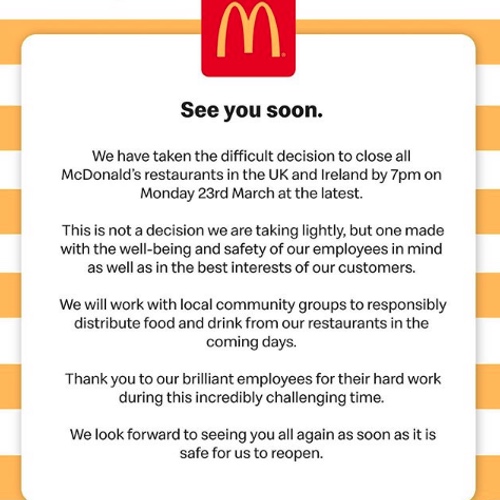 McDonald’s also announced the closure of its UK restaurants. | @McDonaldsUK

Companies Close Due To Coronavirus Outbreak

KFC UK isn’t the only company shuttering its doors to prevent the spread of the coronavirus.

British bakery chain Greggs announced today it will be closing all of its stores on Tuesday, March 24.

“We’ve been doing everything we can to keep our shops open and everyone safe but it has become clear that to help us all maintain social distance we need to go further and close all of our shops completely,” the company said in a statement.

McDonald’s, Nando’s, Primark, and a number of other companies have also announced closures of U.K. branches to help limit the spread of the coronavirus.

Last week, British Prime Minister Boris Johnson ordered the closure of all U.K. restaurants, clubs, and pubs. He stated the establishments should only remain open for takeout.

Starbucks announced last week it would be temporarily closing its North America locations for the next two weeks. It said it would only offer drive-through service.