(Updated July 17, 2020) | KFC is about to trial vegan fried chicken in Southern California.

The test will take place in more than 50 locations in Los Angeles, San Diego, Orange County, and the surrounding area. It kicks off for a limited time starting July 20. The offer includes a six or 12-piece nuggets combo with a dipping sauce. The Beyond Fried Chicken is 100 percent plant-based, but KFC notes it is prepared in the same fryers as its traditional chicken.

“I’ve said it before: despite many imitations, the flavor of Kentucky Fried Chicken is one that has never been replicated, until Beyond Fried Chicken,” Andrea Zahumensky, chief marketing officer at KFC, said in a statement. “We know the east coast loved it, so we thought we’d give those on the west coast a chance to tell us what they think in an exclusive sneak peek.” 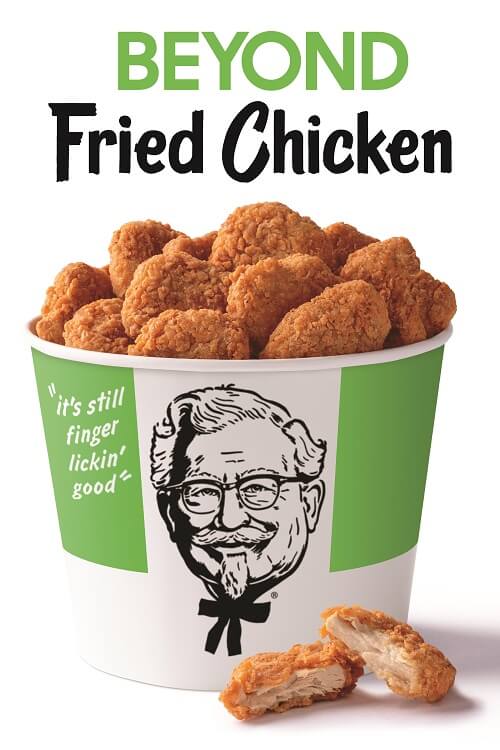 The test is part of KFC’s ongoing collaboration with California-based vegan meat brand, Beyond Meat. The fast-food chain first launched a one-day trial of Beyond Fried Chicken at an Atlanta restaurant last summer.

The restaurant was painted green for the day as customers lined up around the block to try the new menu items: boneless wings and chicken nuggets made from soy and wheat. The store sold out in less than five hours.

However successful, KFC and Beyond Meat sought to improve the texture of Beyond Fried Chicken. Both wanted to offer customers an option with the characteristic pull-apart texture whole muscle chicken.

According to Beyond Meat CEO and founder Ethan Brown, creating plant-based chicken with a realistic texture proved to be more of a challenge than making vegan burgers and mince.

KFC and Beyond Meat took Beyond Fried Chicken back to the drawing board to make improvements. Commenting on the original vegan chicken nugget prototype, Brown said: “I think you lose a lot of what’s great about the sensory experience of eating a chicken breast, for example.”

Earlier this year, the brands trialed the new recipe at more than 70 locations in Charlotte, Nashville, and the surrounding areas.