KFC has launched “New Era” vegan chicken with Alpha Foods and Gardein at select restaurants in Hong Kong. It follows on the heels of a major announcement by parent company Yum! Brands in China last month. The fast-food giant partnered with Beyond Meat to launch vegan meat across KFC, Taco Bell, and Pizza Hut locations throughout China.

From today, KFC Hong Kong is launching their new Plant-Based Series at 19 selected locations. The series includes New Era Nuggets and the New Era Burger, made using plant-based meat from Alpha Foods and Gardein respectively. The burger comes with sliced dairy cheese and tortilla chips. Both options are available as combo meals, including fries and a drink.

“When the legendary KFC Colonel dons green, you know a NEW ERA is officially here,” said Yeung. “On this special Green Monday here in Hong Kong, we are thrilled to announce the introduction of plant-based ‘New Era Nuggets’ and ‘New Era Burger’ on KFC menu, featuring exciting products from Alpha Foods and Gardein.”

“This milestone launch will without a doubt further ignite the plant-based movement in Asia and globally,” added Yeung. Green Common was the first to bring the Beyond Burger to Asia in 2018. It also launched JUST’s vegan egg in Hong Kong that same year.

According to a recent study from Ipsos, 83 percent of Hong Kong’s population aims to eat healthier. The Green Monday commissioned study revealed that many consumers aim to reduce their meat consumption in favor of plant-based alternatives. The ongoing COVID-19 pandemic has also supported an overall shift away from animal products in Hong Kong and China. 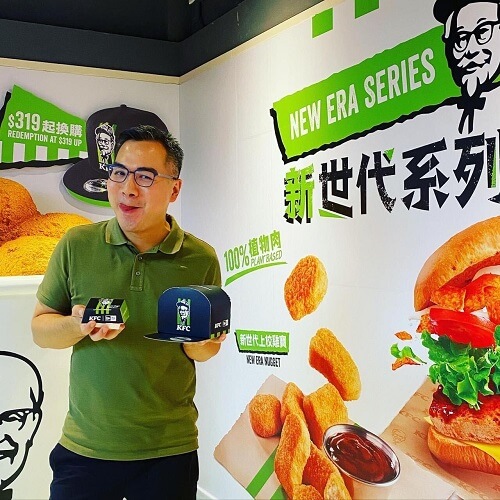 KFC has been quick to embrace vegan options. Last summer it launched a vegan chicken trial at an Atlanta location. The vegan white meat was made with Beyond Meat’s meatless chicken. The restaurant was painted green for the day instead of the usual red, and a line around the block saw customers waiting more than five hours for a taste. KFC said the launch saw the equivalent in sales of a week’s worth of popcorn chicken.

It then launched vegan chicken in Ontario, Canada, again selling out in a matter of hours. Last January, it launched a vegan chicken sandwich at 900 UK locations. Later that month it expanded its Atlanta trial throughout 70 Charlotte, North Carolina, and Nashville, Tennessee, locations.