“When we tested Plant-Based KFC by Lightlife late last year, we sold over a month’s worth of sandwiches in six hours,” said Samantha Redman, Chief Marketing Officer at KFC Canada, in a press release.

“Seeing the extraordinary demand for Plant-Based KFC, we worked quickly to bring these menu items to our restaurants across Canada,” she added.

Lightlife has been making plant-based food for over 40 years. The recent collaboration marks its first with KFC, the world’s most popular chain of chicken restaurants.

“The Plant-Based KFC sandwich delivers the same great taste of chicken,” said Dan Curtin, President of Greenleaf Foods, SPC, the owner of Lightlife. “But made with plants.”

The global plant-based meat market is growing. By 2030, experts predict the industry could be worth $85 billion. A separate report states the market could be worth more than $35 billion in four years’ time.

“Lightlife is excited to continue on this journey with KFC,” continued Curtin. “Providing Canadians with plant-based foods that deliver on incredible taste and are more broadly available to consumers who know balance is essential to living well.” 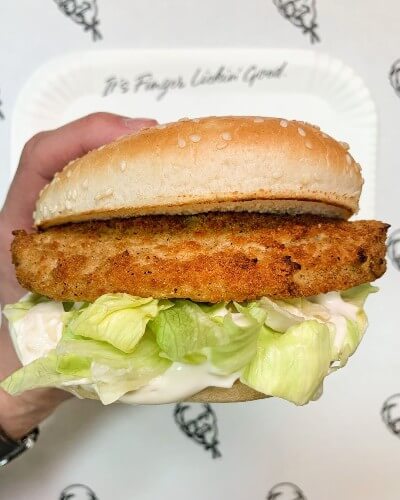 KFC restaurants around the world have trialed vegan meat in order to cater to growing consumer demand.

Last year the fast-food chain launched the plant-based Imposter Burger in the UK, made with Quorn. In the U.S., KFC Atlanta trialed vegan fried chicken from Beyond Meat. In both instances, the new vegan additions sold out rapidly.

“Whether you enjoy a vegetarian or flexitarian lifestyle—or you’re one of our loyal fans looking for something new, Plant-Based KFC is a modern take on our world-famous classics,” said Redman.

Customers can order each item individually, as a combo, or as part of a box meal.