Khloé Kardashian, reality TV star and socialite with an Instagram following of more than 97 million, urged her fanbase to ditch beef following the news of the devastating Amazon fires.

The 35-year-old “Keeping Up With the Kardashians” star posted an infographic on her Instagram story titled “How you can help the Amazon rainforest,” shared from user @plantyou.

“Try to stop eating beef completely if possible and try to generally have a more plant-based diet (this is the biggest reason why the Amazon rainforest is now on fire as they are burning down the rainforest to grow grains to feed cattle (beef),” the post read.

“Influence the huge companies with your buying power (If you do not buy they will not produce (Unilever, Nestlé, Walmart, P&G),” the post Kardashian shared added.

The Amazon Is Burning 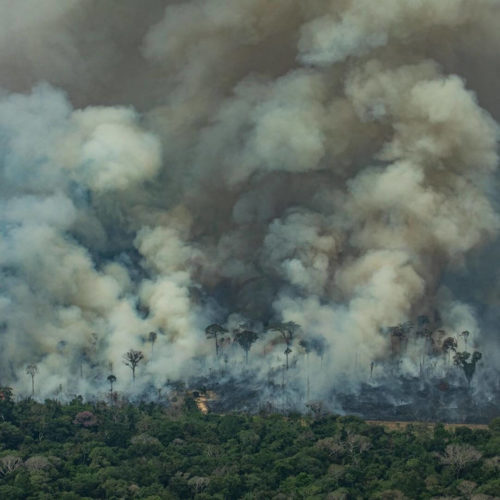 More than 26,000 forest fires have been recorded in the Amazon since the start of the month — the highest number in a decade. Brazil’s National Institute for Space Research (INPE) has recorded more than 72,000 fires in the country this year, a sharp increase from the 40,000 reported last year.

Beef production is the major driver of rainforest destruction. The Amazon — called “the planet’s lungs” due to the fact that it supplies six percent of the Earth’s oxygen — is the largest exporter of beef in the world and 80 percent of it has been torn down to make room for cattle grazing and soy cropland. Ninety percent of the soy grown in the Amazon is fed to cattle.

Brazil’s Amazon rainforest is the most biodiverse region on the planet, home to half of the planet’s estimated 10 million species of flora, fauna, and insects. More than one million Indigenous people also call the forests home.

A 2018 study from the Wildlife Conservation Society (WCS) revealed that land privately owned by Indigenous people is the best way to protect rainforest biodiversity and to mitigate climate change.

“Stewardship of Indigenous lands is crucial to conserving the world’s remaining intact forest ecosystems,” said Cristián Samper, CEO of the WCS. “It is vital that natural resource governance systems enable them to build on and expand that role as a central part of any strategy to safeguard intact forests in the future.”

Brazilian president Jair Bolsonaro — nicknamed “the Trump of the tropics” by some media for his denial of climate change — has done the opposite. Last year, he denied new land claims for Indigenous people in favor of selling land to commercial mining and farming companies, Reuters reports. He argued that they should “integrate” with the rest of Brazil and compared them to “animals trapped in a zoo.”

Earlier this week, Bolsonaro rejected $22 million in aid from other countries at the G7 Summit in France, the New York Times reports. He told reporters that he would reconsider if French president Emmanuel Macron withdrew heated comments exchanged in a Twitter feud on Monday, in which Macron said Bolsonaro is not doing enough to protect the environment. Bolsonaro’s approval rating in Brazil plummeted this month. A total of 39.5 percent of Brazilians say he is doing “bad or terrible,” up 19 percent from earlier this year.

Academy Award-winning actor Leonardo DiCaprio has aligned himself with Indigenous tribes and local nonprofits in the fight to save the Amazon. The Earth Alliance, a nonprofit launched by DiCaprio last July, kicked off its Amazon Forest Fund earlier this week. The organization pledged $5 million to five local groups: Instituto Associacao Floresta Protegida (Kayapo), Coordination of the Indigenous Organizations of the Brazilian Amazon (COIAB), Instituto Kabu (Kayapo), Instituto Raoni (Kayapo), and Instituto Socioambiental (ISA).