Currently, Burgerlords has two locations, in Chinatown and Highland Park. Any future locations of the chain will also only offer vegan food.

While Initially, Guerrero—who opened the location with his brother Max —had intended for the menu to be completely vegan, he decided to serve beef too. The Highland Park spot opened last year, also with beef on the menu.

Now Guerrero has decided to ditch meat completely and go back to his original vision. He told LIVEKINDLY, “I’ve been vegetarian since I was about eight years old, so I really wanted to have a restaurant that was more representative of how I ate.”

He added: “We’ve gone back and forth with the idea of going all vegan, so we just thought now was as good of a time as any.” 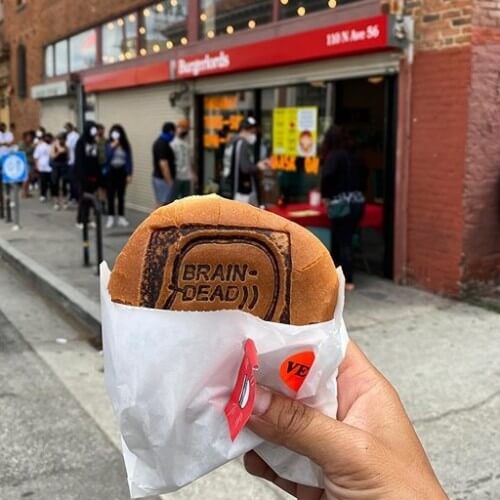 Burgerlords is donating a portion of the profits from the Brainburner to Stop AAPI Hate.

The new 100 percent vegan menu features sandwiches like the Burgerlords Vegan Cheese Burger, which features a “30-ingredient signature patty;” the Buffalo Ranch Tofu Burger; and the spicy Brainburner. The latter is a collaboration with Braindead, an LA-based creative collective of artists and designers. The burger features a Braindead stamp on the bun.

Both Guerrero and Braindead’s founder Kyle Ng are of Asian American descent, so the duo decided to donate a portion of the profits from the burger’s sale to Stop AAPI Hate. Previously, they have donated to civil rights law organization NAACP Legal Defense Fund.

“[Stop AAPI Hate is] a coalition of community-based organizations that advocate for the rights and needs of the Asian and Pacific Islander American (APIA) community in the greater Los Angeles area,” explained Guerrero.

More burgers will be coming soon.“This is somewhat of a ‘soft launch,'” he added. “We will be adding much more to the menu down the line.”

So far, the owner says customers are enjoying the new vegan menu. “The public’s reaction has been overwhelmingly positive,” he said.

“We sold out of food the first three days during launch and had to close on Sunday,” he added. “Most everything here is made from scratch, so logistically, it just wasn’t possible for us to make more!”