Scientists are on their way to being able to make lab-grown breast milk.

Eighty-four percent of mothers end up transitioning to dairy-based infant formulas prior to the recommended six-month breastfeeding exclusivity period, according to Biomilq founders Leila Strickland and Michelle Egger. A cell biologist and a food scientist, the pair want to offer families a safe, new option for feeding their babies.

“Whether it’s low milk production, incompatible workplaces, or the ongoing stigma around breastfeeding in public, families feed infant formula out of necessity rather than preference,” Strickland and Egger wrote on Medium.

“Parents and caregivers are left with suboptimal choices, and they want an option that doesn’t force a trade-off between babies’ nutrition and mothers’ well-being.”

Biomilq isn’t alone in its quest to provide another option. Singapore-based TurtleTree Labs and New York-based startup Helaina are also working on their own alternatives to breast milk.

Biomilq’s lab-grown product is not an exact replica yet, but their samples are similar to the real deal. Stickland and Egger will be working with families, pediatricians, and people in the breastfeeding and lactation community to ensure their lab-grown breast milk is the best alternative it can be.

They note, “while there is no replacement for breast milk, we believe we can harness the power of science, technology, and nature to deliver comprehensive and sustainable infant nutrition.” 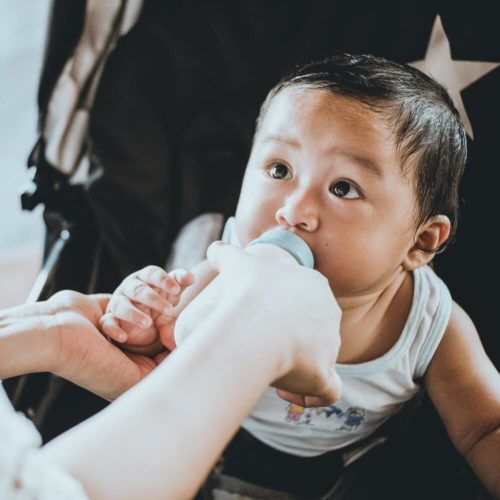 Many caregivers bottle feed out of necessity, say the founders of Biomilq.

The Rise of Lab-Grown Products

Lab-grown meat presents another option for those looking to reduce the number of animals slaughtered for meat products. It also could help to minimize the negative environmental impact of traditional meat production.

Startups are developing lab-grown poultry, pork, and seafood. Some products could hit restaurants as early as 2021.

Michael Selden—CEO of Finless Foods, a startup that specializes in creating lab-grown seafood products—recently told The Atlantic he was inspired to create cultured seafood due to the environmental and social injustices that stem from traditional meat production, such as greenhouse gas emissions and ocean plastic pollution.

“The way that we get our food is very much just sort of like, we take what we want,” he explained. “If you live in San Francisco and you eat bluefin tuna, that bluefin tuna almost definitely comes from the Philippines. And we basically have fishing fleets in the Philippines that are, like, destroying local ecosystems to feed us.”