The new supermarket stocks a “huge array” of popular plant-based foods including local favorites and some “new discoveries.”

The supermarket was founded to provide locals with a worry-free, 100 percent plant-based shopping experience. Veg-In-Out will offer a variety of treats and everyday shelf-stable cooking items; vegan junk food, frozen, and pre-packaged refrigerated products are all pictured on the company’s official Instagram.

“With Veg-In-Out Market we hope to bring a sense of community between those who are currently vegan, those who are thinking of becoming vegan, and those who don’t know they’re vegan… yet,” said Veg-In-Out co-founder Erik Rogers in a statement.

“We want a judgment-free zone,” Rogers explained. “We all start our journey to becoming a vegan in different ways and for different reasons. The important part is that we get there.”

“A small portion of your purchase goes to help animals and those who love them in the Las Vegas area and nationwide,” says Veg-In-Out on its website. “This will change to a different non-profit organization each month.” 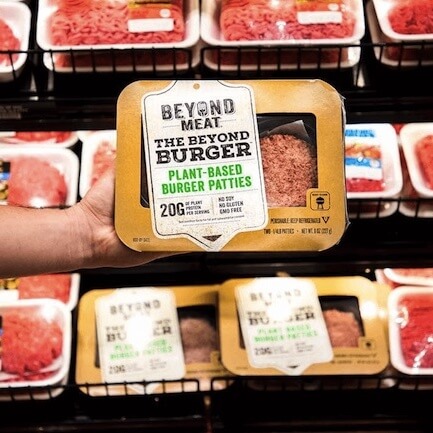 The new vegan supermarket will sell Beyond Meat.

In the U.S, more and more people are embracing vegan food to improve their health, help the environment, and to boycott animal cruelty.

Las Vegas already has a growing vegan scene. It has a 100 percent plant-based butchers shop, a vegan hot dog cart, and a number of vegan-friendly restaurants, including Big Whiskey’s American Restaurant & Bar. The meat-heavy establishment launched a vegan menu earlier this year, it was the first in the franchise to do so.