Vivera Foodgroup is one of the first meat companies in the world to remove meat from its lineup in favor of plant-based foods.

The company just sold Enkco, which specializes in chilled and deep-frozen meats, to Dutch Van Loon Group. Vivera Foodgroup now only has meat-free companies under its name, including Vivera, Culifrost, and Dutch Tofu Company.

The shift away from meat will allow Vivera Foodgroup to focus on the “strong growth opportunities” in Europe’s vegan food market, the company said in a press release. The company holds a “strong market position” in large regions of Europe and is one of the three largest players in the continent thanks to its brand Vivera, which makes plant-based meals and vegan meat such as its fat-free bacon.

Willem van Weede, CEO of Vivera Foodgroup, said in a statement, “We are one of the first companies in the world’s meat industry to say final goodbye to meat. From now on we only focus on plant-based foods which are really conquering the world.”

Van Weede continued, “More and more consumers are discovering that plant-based products can be just as tasty as real meat and have many benefits for personal health, environmental impact, and animal welfare.”

The CEO added that by ridding meat, Vivera Foodgroup will be able to further its international presence. 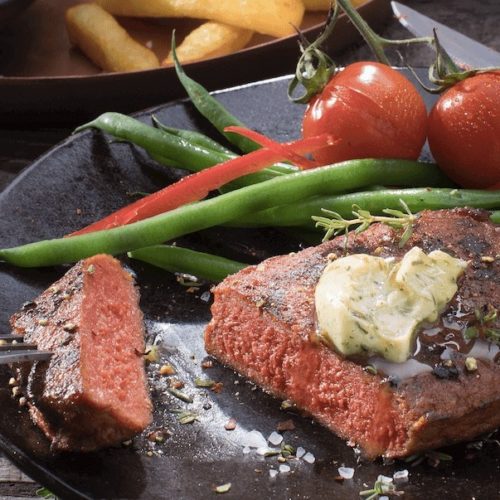 Last year, Vivera launched the world’s first commercially available vegan steak in 400 Tesco supermarkets. The meat-free creation is made with ingredients like soy and wheat protein, sunflower oil, and beetroot.

More than one million vegan steaks have been bought at Tesco since the launch.

Vivera has created a number of other items since then, including Pulled Veggie, Shawarma Kebab, and Veggie Quarter Pounder, in a bid to make plant-based eating more accessible. “Vivera believes that life is better when you eat less meat,” the company says on its website, adding that its vegan products make it an “easy choice: More life, less meat.”