Together with Acadamy Award-winning director and screenwriter Barry Jenkins, DiCaprio is adapting the 2014 award-winning documentary “Virunga.”

The documentary—also executively produced by DiCaprio—follows the story of park rangers in Virunga National Park, in the eastern Congo, as they fight to protect some of the planet’s last remaining mountain gorillas from conflict, poaching, and oil companies.

Back in 2014, film reviewer Ronnie Scheib wrote for Variety that the documentary has “enough action, pathos, suspense, venal villains, stalwart heroes, and endangered gorillas for a dozen fiction films.”

Six years later, it’s getting at least one. DiCaprio will produce the new film adaptation through his production company Appian Way, together with Phillip Watson.

Jenkins will write the script, Jennifer Davisson is also a producer, as is Violet Films’ Joanna Natasegara. The director of the original documentary Orlando von Einsiedel is an executive producer. 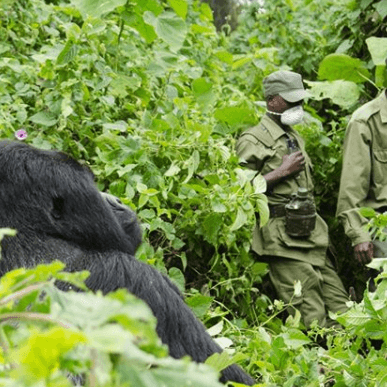 Virunga National Park is close to DiCaprio’s heart. The Academy Award-winning actor said in a recent statement, “I had the great honor of meeting and supporting Virunga’s courageous team in their fight against illegal oil drilling in 2013.”

Last month, he launched a $2 million fund for the park—which is Africa’s oldest and most biologically diverse protected area—through Earth Alliance, a wildlife protection nonprofit he co-founded with the Emerson Collective and Global Wildlife Conservation, and the European Commission.

The park is currently closed due to the Covid-19 pandemic, which, as well as ebola, is a threat to the rangers and the gorilla population. Conflict is also still ongoing. Twelve rangers, a park driver, and four civilians died after an attack on the park’s headquarters in April.

The money will support disease prevention, law enforcement, and gorilla protection, as well as rangers and their families.

“Virunga urgently needs funds to protect the endangered mountain gorilla population,” DiCaprio added. “To provide support to the rangers and the families of rangers who have fallen in the line of duty, and to help deliver essential disease prevention efforts.”