The six-time Formula One champion gave the salute twice on Sunday. First, as he was exiting his car after the race and once again standing on the podium. Hamilton urged his fellow drivers to continue the fight against racism, saying that they must collectively “push for equality.”

Hamilton and the other 19 F1 drivers also wore t-shirts with “Black Lives Matter” and “End Racism” on them. Many also joined Hamilton in taking the knee before the race, though some questioned whether the gesture was still necessary.

In his speech, Hamilton said: “Some people were asking ‘How long do we have to continue to do this?’ Some felt like one was enough last week, and I just had to [tell] them that racism is going to be here for probably longer than our time here.”

“People of color who are subject to racism don’t have time to [just] ‘take a moment’ to protest and that be it. We’ve got to continue to push for equality and raise awareness for it,” continued Hamilton.”

Fifty-two years ago, American sprinters Tommie Smith and John Carlos raised their fists during the medal ceremony at the 1968 Summer Olympics. The gesture has since inspired many similar protests and drawn comparisons to taking the knee.

Taking the knee was popularized in 2016 when former San Francisco 49ers quarterback Colin Kaepernick knelt during the national anthem in a symbolize gesture against police brutality and institutionalized racism.

Hamilton has used both the Black Power salute and taking the knee to protest racism. 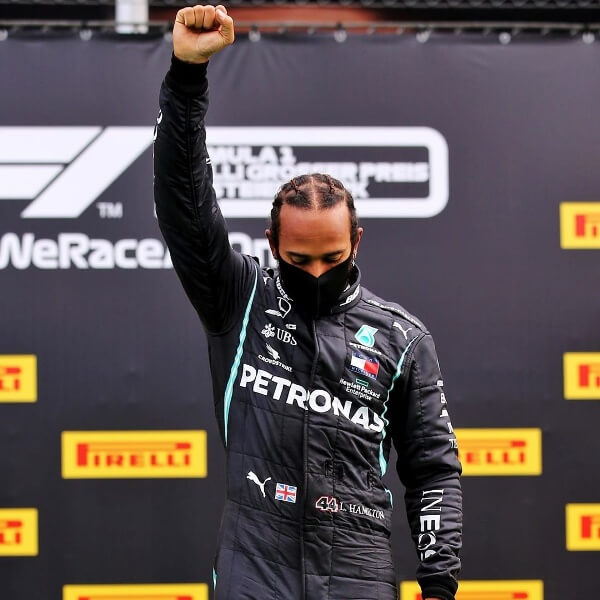 Hamilton said that athletes must continue the push for equality.

Hamilton has been vocal in his support of the Black Lives Matter movement.

The British racing driver often uses his social media presence to raise awareness of social justice issues—particularly veganism, animal rights, and climate change—and has called on his fans to speak out against racism.

“Please do not sit in silence, no matter the colour of your skin,” said Hamilton on Instagram. “Black Lives Matter.”

“I am completely overcome with rage at the sight of such blatant disregard for the lives of our people,” wrote Hamilton. “The injustice that we are seeing our brothers and sisters face all over the world time and time again is disgusting, and MUST stop.”