The five-time Formula 1 racing champion is currently in Japan ahead of the Japanese Grand Prix on October 13. Hamilton wrote on Instagram that the nation is “one of my favourite places in the world.” He added, “One of the most beautiful, peaceful, wonderful places.”

Sharing video footage of a dolphin show posted by Ric O’Barry’s Dolphin Project, Hamilton wrote: “Please please don’t go and support these shows around the world, don’t buy tickets to show your kids. Instead educate them of these horrible things that [have] happened to the dolphins, whales and other sea life. These beautiful creatures shouldn’t suffer.”

It’s not the first time the athlete has used social media to educate his followers. Last September, he put the $2 billion South African trophy hunting industry on blast. On his Instagram Stories, Hamilton shared a post regarding the black giraffe killed by a hunter in South Africa in June 2018.

The post — shared from the Instagram @natures  — said the event raised questions about giraffes being hunted for trophies.

The widely reported event caused a public firestorm due to population declines — 40 percent in the last 30 years, according to the Humane Society International — and the Kentucky hunter’s lack of guilt. “She has shown absolutely no remorse for killing this beautiful creature,” the post said.

In an interview with CBS, the hunter said she turned the slain giraffe into meat, decorative pillows, and a gun case. She said that she believes animals were put here for humans to use and intends to continue hunting “for conservation.”

The South African trophy hunting industry is both legal and lucrative, the post explained, worth $2 billion a year. 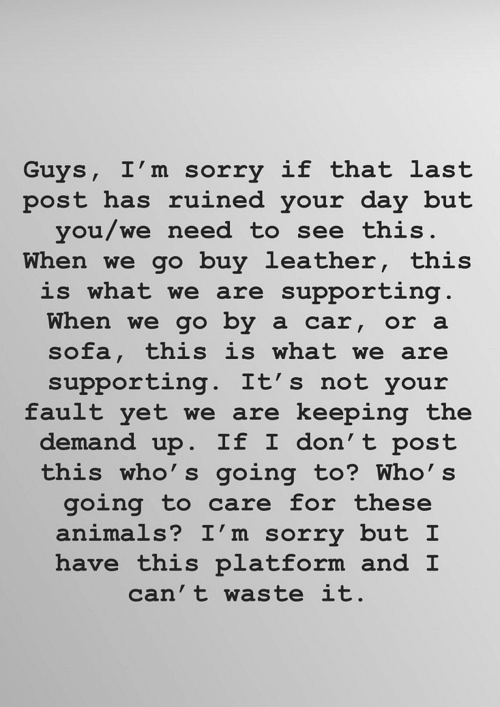 Lewis Hamilton believes in using his platform to send a message.

Hamilton hasn’t just turned his attention to trophy hunting. He regularly uses Instagram, where he accrued 12.6 million followers, to talk about industries that harm animals — which sometimes involves graphic images. Hamilton defended his method in a separate Instagram story: “I’m sorry, I have this platform and I can’t waste it.”

Rhino horn — which is made from keratin, like human hair and nails — is valued by certain forms of traditional medicine. The post continued, explaining that poaching is a bloody business for all involved. “We need to be clear that the demand for rhino horn is not only costing the lives of rhino, but also the lives of those who dedicate their lives to protecting them,” it said.

Hamilton also brought up the whale hunts in the Faroe Islands. The annual hunt takes place off the coast of the islands. Hunters drive pilot whales into the bay before slaughtering them. “How are any of these humans just standing there thinking this is ok?” Hamilton wrote. “This is not in any way, shape, or form ok. This is disgusting and Denmark, you need to put a stop to this!”

The vegan athlete also spoke out about Iceland’s new whaling quota earlier this year. The Nordic island announced it would not hunt whales for the first time in 17 years last June, but the practice will resume next year. “This is a disappointing and short-sighted move by the country’s political leaders,” Hamilton said of the decision to continue whaling. “As the largest marine mammals, whales play a critical role in keeping our oceans healthy. They prevent species over-population, regulate food systems and combat climate change.”