(Updated June 10, 2020) | Vegan six-time Formula One Champion race car driver Lewis Hamilton has called for fans to speak out against racism. He also shared his support of protestors and the Black Lives Matter movement.

In his latest Instagram post, the British racing driver wrote: “Please do not sit in silence, no matter the colour of your skin. Black Lives Matter.”

“I am completely overcome with rage at the sight of such blatant disregard for the lives of our people,” wrote Hamilton. “The injustice that we are seeing our brothers and sisters face all over the world time and time again is disgusting, and MUST stop.”

In the U.S., the protests began following the recent murder of George Floyd by Minneapolis police officers. But activists are also drawing attention to institutionalized racism and several other specific, recent deaths of Black Americans.

In Louisville, Kentucky, police officers killed local business owner David McAtee when firing into a crowd of protestors. Protests in the city have highlighted the recent killing of emergency medical technician Breonna Taylor.

Protestors also highlight the murder of Ahmaud Arbery, and the significant delay before officials made arrests.

Police officers continue to receive criticism for their treatment of protestors and people of color, including the arrest—without explanation—of CNN reporter Omar Jimenez and his team, live on air. A white CNN reporter was also covering the Minneapolis protest from nearby and remained unaccosted by police officers. 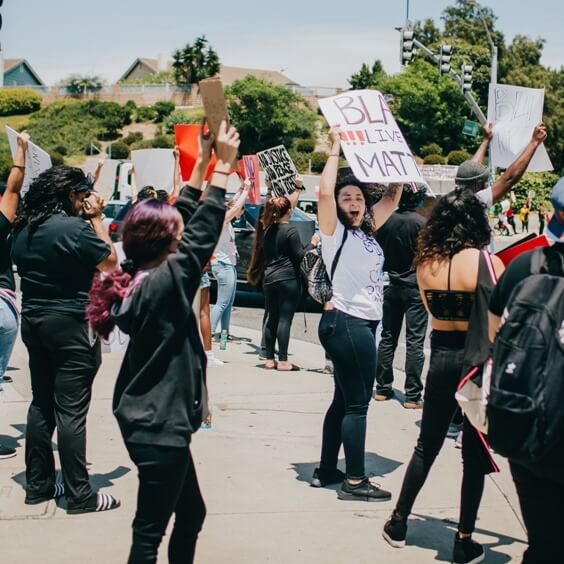 People are protesting against police violence and racism across the U.S., the UK, and France.

‘It is Not Surprising’

According to Mapping Police Violence, Black Americans are nearly three times more likely to be killed during interactions with the police than white Americans.

They are also approximately 1.4 times more likely to be unarmed during fatal interactions with the police.

“So many people seem surprised, but to us, unfortunately, it is not surprising,” wrote Hamilton. “Those of us who are black, brown, or in between, see it every day.”

Hamilton has specifically condemned the silence of the motorsport industry at this time. In a separate post, he said he “stands alone” in the community by speaking out.

“I see those of you who are staying silent. Some of you the biggest of stars yet you stay silent in the midst of injustice,” he added. Several drivers have since shared their support for the Black Lives Matter movement. These include Charles Leclerc, Carlos Sainz, and Lando Norris.

“It is only when there are riots and screams for justice that the powers that be cave in and do something,” wrote Hamilton. “But by then it is far too late and not enough has been done.”

Despite the fact the motorsport industry has remained silent, Hamilton says he is inspired by everyone that has come together to create change.

“I woke up this morning so inspired by all of you out there. It’s humbling to see so many coming together for change,” he wrote in an Instagram Story post.

“Everything we are fighting for, it’s such a bigger picture that [it] is hard to see or imagine right now but will be life-changing for so many and particularly [for] the future generations,” he added.