Updated October 26, 2019 | Formula One driver Lewis Hamilton’s vegan burger restaurant has opened — and he hopes to open at least 100 more within the next six years.

Hamilton launched Neat Burger together with hospitality organization The Cream Group. The plant-based concept’s first location opened in London, but it has a rapid expansion plan.

“1500 burgers eaten within 2 hours,” Neat Burger wrote on Instagram after the launch. “Don’t worry. there’s a lot more where that came from, see you all tomorrow!”

“I’m very passionate about being kinder to our world and also really respect Neat Burger’s commitment to more ethical practices and supporting small businesses, so this is something I’m also really proud to support,” Hamilton said in a statement prior to opening.

Neat Burger serves the Beyond Burger, the now-famous “bleeding” pea protein patty created by California-based Beyond Meat, as well as Violife vegan cheese. It is also the first UK restaurant to offer the Beyond Sausage. The vegan sausage “sizzles” and snaps just like its pork counterpart.

“As someone who follows a plant-based diet, I believe we need a healthier high street option that tastes amazing but also offers something exciting to those who want to be meat-free every now and again,” Hamilton continued.

Neat Burger co-founder Ryan Bashti told iNews that 14 locations will open in the UK. A New York City restaurant will follow and by 2025, there will be more than 100 across the world.

“We’ll be on every continent,” he said. “We’ve had interest from all over. And we’re about to sign a major partnership with a high-profile drinks brand. Expansion is going to be fast. To begin with, in the UK, we’re concentrating on major cities. You could say we’re aiming to be the vegan Five Guys, yes.” 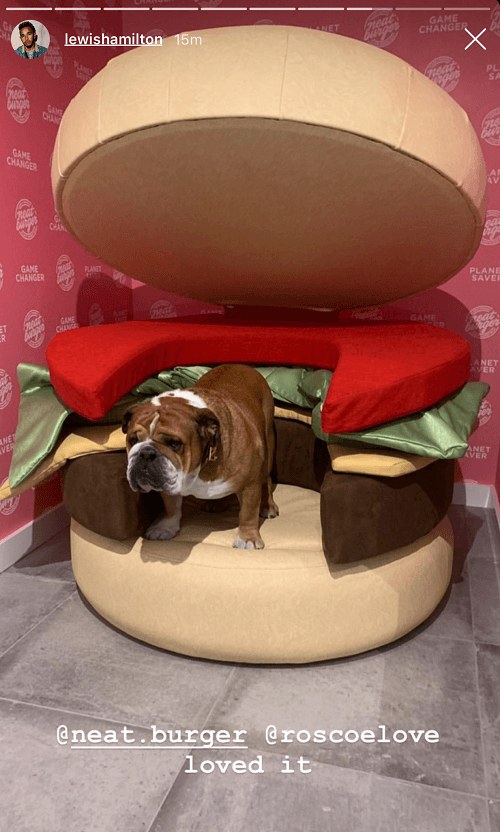 Hamilton has followed a vegan lifestyle since 2017, after he watched the vegan documentary “What the Health.” Since then, he has discovered the ethical side of veganism. He often uses his social media platform to speak out on behalf of animals.

At the end of last year, he shared an image of a mother sow with her piglets in a trash can on Instagram. He captioned the post, “we all have a voice, I have this platform and so to not use it correctly would be wrong [of] me. Nobody is perfect, I certainly am not but this is actually happening every day to so many animals worldwide.”

“This is why I have decided to go to a vegan plant-based diet, been over a year now,” he added. “Yes it’s hard, [nothing is] ever easy but I’ve felt the best I’ve ever felt for the past year.”

The first Neat Burger restaurant is located on Regent Street in London.