Lewis Hamilton is getting a new ride. The six-time Formula One champion is set to race in an all-black car in support of the Black Lives Matter movement.

Hamilton, who drives for Mercedes, helped the company design the new car. Mercedes unveiled the new design on its Instagram account.  The company said it gave up its signature “Silver Arrows” trim to help “improve the diversity of [its] team and fight racism.”

The British racer will drive the new car—dubbed the Black Arrow—throughout the duration of the 2020 Formula One season. His teammate, Valtteri Bottas, will also race in an all-black car.

“I am so proud of this team for being open-eyed to the serious issue of racism and discrimination. They’ve taken steps to ensure they are being openminded, to be willing to learn from lessons past and present and working together wholeheartedly for a better, more equal and inclusive future,” Hamilton wrote on Instagram.

He added: “The silver arrows has been a prominent leader for decades and this marks a new era for them also where we push for inclusion and diversity. We have much to do, but I’m confident that together we can help change this sport and spark the others in the industry to follow.” 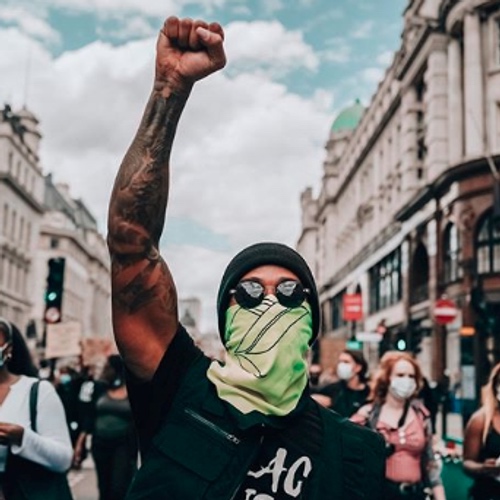 Hamilton regularly speaks out against racial injustices. Last month, he peacefully protested at a Black Lives Matter rally in London’s Hyde Park. “I was so proud to be out there acknowledging and support the […] movement, and my Black heritage. I was so happy to see people of all ages sporting Black Lives Matter signs and saying it just as passionate as I was,” he wrote on Instagram.

The vegan racer has applauded the removal of racist statues and encouraged his fans to speak out against racism. In an Instagram post, he wrote: “Please do not sit in silence, no matter the colour of your skin. Black Lives Matter.”

Hamilton also appeared on an episode of Together Apart with One Young World ambassador Kenny Imafidon. The UK-based organization connects young leaders from around the world to develop solutions to tackle some of the world’s most pressing issues.

Hamilton discussed his experiences with racism as Formula One’s first and only Black driver. He has previously called out the sport’s lack of diversity.

“The truth is that it was incredibly hard for me to break into this industry. I wish I could say it was better today but if anything, I think the situation is worse than ever before,” he revealed during an interview earlier this year.

Hamilton will sport his new all-black ride this weekend at the Austrian Grand Prix.