Lidl first introduced the Next Level Meat brand last August with a vegan burger made from pea, soy, and wheat protein. Like Beyond Meat’s burger, it contains 20 grams of protein.

The burger comes after Beyond Meat sold out in German stores in late May, “sending customers into a frenzy,” according to Yahoo!, and sending Beyond Meat’s stock up almost 7 percent.

Jan Bock, Purchasing Manager at Lidl Germany, acknowledged in a statement the public’s rising preference for plant-based meat. Bock also noted vegan food’s expanding position in the food market. The Next Level Burger’s “unbeatably low Lidl price,” is just €2.99 for a pack of two; the Beyond Burger sets shoppers back around €5.

Thanks to positive feedback, Lidl has expanded the range with vegan mince. Called Next Level Hack, it’s also made from a blend of pea, soy, and wheat protein. According to Bock, Lidl may introduce other “Next Level” vegan options in the future.

“With this customer response, it was the logical next step to offer more vegan products at the unbeatably low Lidl price to make alternative meat consumption simple and attractive,” Bock said in a statement. “It will be particularly interesting to see how the plant-based hack is received in comparison to the popular meat variant. We are already working on further campaigns.” 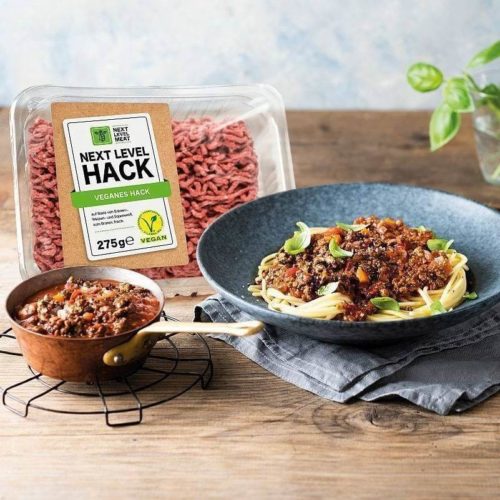 Vegan food has proved popular at Lidl in the past. When the Beyond Burger launched at the discount chain earlier this year, it sold out almost immediately.

Lidl’s vegan range goes further than burgers. The chain also offers vegan Spanish omelettes. The omelettes are also gluten-free; they’re made with chickpeas and onion. Available in Lidl’s Spanish locations, the vegan omelettes are being sold under Lidl’s own-brand label, “My Best Veggie.” According to Lidl’s website, the line is “aimed at everyone,” not just vegans and vegetarians.

In the UK, Lidl offers two plant-based pizzas under its own-brand name Trattoria Alfredo. The Vegan Bruschetta is topped with red onion and tomato. The Pizza Veruda features spinach, tomato, and mushroom. Both pizzas are topped with dairy-free mozzarella.

The vegan Next Level Burger and Next Level Hack are available at 3,200 Lidl stores in Germany.