The plant-based “Delicioza” pizzas — the own brand range has been available in European Lidl locations for a few years now — come in two flavors: Vegan Bruschetta and Pizza Veruda. The former is topped with tomatoes and red onions while the latter has spinach, mushroom, and tomato — both come with dairy-free mozzarella.

The budget-friendly German chain’s vegan groceries in the UK have been behind competitors. But there are some options to be found, according to blogger Vegan Womble, including Trattoria Alfredo garlic bread, dairy-free rosti, crumpets, cookies, some cereals, and even meatless bacon rasher chips. Last November, it launched vegan wine ahead of the holiday season. 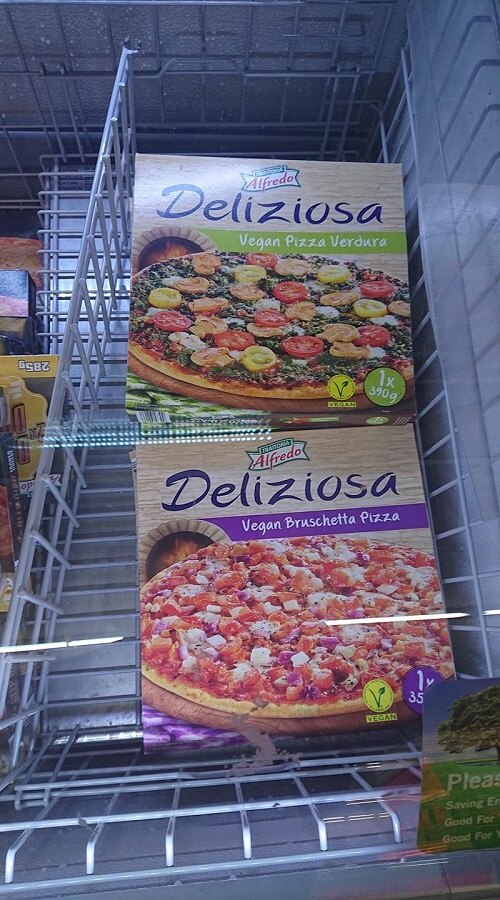 Lidl’s vegan pizzas are now available in the UK

UK Supermarkets Want a Piece of the (Vegan) Pizza Pie

Once relegated to health food stores and small sections of the freezer aisles, vegan options are becoming more common in UK supermarkets. Major chains including Tesco, Waitrose, Iceland, Morrisons, Asda and more have all launched plant-based pizza options over the last year.

Beyond the supermarket aisle, pizza chains are changing up menus: Pizza Hut, Papa John’s, Pizza Express, and ASK Italian are just some of the restaurants offering vegan pizza now.

Why the seemingly sudden influx of vegan pizza? It all has to do with evolving consumer eating habits. Last year, one in six new product launches in the UK were vegan — more than any other nation, according to a report from global market research firm Mintel. Plant-based restaurant options also increased by 237 percent.

Additional data revealed that 34 percent of the UK say they are eating less meat, up 27 percent from last year. Nearly a third say that they’re convinced by recent data connecting animal agriculture to climate change.

It’s also telling that a record-breaking 3 million individuals across the nation pledged to go vegan last January. The environment, ethics, and health are all factors inspiring people to eat fewer animal products. Studies have linked meat consumption — red and processed meat in particular — to an increased risk of health conditions such as heart disease, type-2 diabetes, and certain forms of cancer. Dairy, on the other hand, is high in saturated fat, which can be linked to higher cholesterol levels.