Lidl Switzerland is launching a dedicated vegan and vegetarian section across all of its stores. The budget-friendly supermarket has more than 140 locations nationwide.

Lidl initially trialed the “veggie block” concept at 53 stores. Along with the dedicated section, the supermarket is expanding its range of vegan and vegetarian products, which includes plant-based meat, ready-meals, and dairy-free milk and yogurt.

“The vegan and vegetarian diet has been gaining in importance for years. After we have already added various vegan and vegetarian products to our range in recent months, we are now also providing a simple and clear orientation option in the branch with our veggie block,” Andreas Zufelde, Chief Commercial & Marketing Officer of Lidl Switzerland, said in a statement. 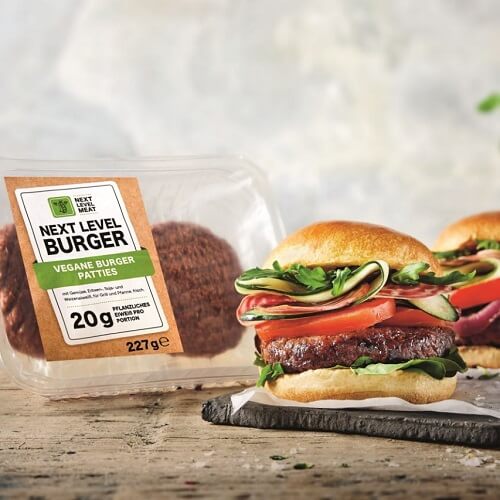 Lidl launched a “Next Level” range of vegan meat in Germany last summer.

Last August, Lidl Germany launched its “Next Level” range of vegan meat, beginning with burgers. Made from a blend of pea, soy, and wheat protein, the plant-based burgers resemble California-based brand Beyond Meat’s signature Beyond Burgers. One burger contains 20 grams of vegan protein.

Due to positive customer reception, the supermarket expanded the range last September with a plant-based mince called “Next Level Hack.”

“With this customer response, it was the logical next step to offer more vegan products at the unbeatably low Lidl price to make alternative meat consumption simple and attractive,” Jan Bock, Purchasing Manager at Lidl Germany, said in a statement. “It will be particularly interesting to see how the plant-based hack is received in comparison to the popular meat variant. We are already working on further campaigns.”

Headquartered in Neckarsulm, Germany, Lidl has stores across 29 countries, including France, Poland, the Netherlands, the UK, and the US. Locations in other countries have also expanded vegan options.

Swedish stores introduced plant-based meat brand Oumph!, which makes products including kebabs, burgers, rib-style fillets, in February 2019. In the UK, Lidl offers a budget-friendly range of plant-based milk, dairy-free ice cream, and “Without Meat,” its own-brand range of vegan meat. Like Lidl Germany’s “Next Level” range, the burgers and mince are made from pea, soy, and wheat protein.