Lightlife’s new Plant-Based Sausages — which come in two flavors, Bratwurst and Italian — promise the taste and texture of a traditional pork sausage.

The sausages were rolled out to east coast grocery store chain Acme Markets late last month, along with its new vegan burgers and ground beef. “Find us in the meat aisle for a juicy, delicious burger that’s perfect for all the summer BBQs ahead,” the brand wrote on Instagram.

Lightlife is using a strategy similar to El Segundo, California-based brand Beyond Meat, which led the way for vegan protein in the meat aisle.

“Driven by our best-in-class R&D team, we’ve been able to develop these amazing new products in record time,” Michael Lenahan, vice president of marketing for Lightlife Foods, said in a statement.

The new Lightlife products are similar to Beyond Meat’s portfolio of realistic plant-based meat, including the Beyond Burger, Beyond Sausage, and its upcoming mincemeat. 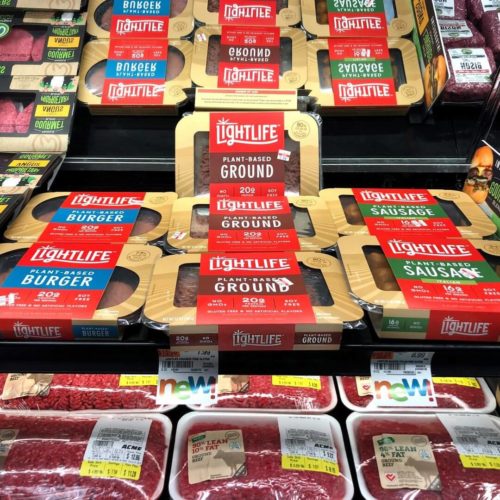 Lightlife vegan sausages are now available on the east coast

Feeding the Demand for Meatless Meat

The demand for plant-based meat is on the rise in the U.S. More than half of Americans prefer the taste of vegan protein, according to Mintel research. Major brands, including Nestlé and Tyson, are entering the market, and Beyond Meat and Impossible Foods — both major players in the vegan meat market — are working to keep up with demand.

Both companies were united under the umbrella brand Greenleaf Foods in October 2018 as part of Maple Leaf’s goal of becoming a sustainable protein brand. Last April, the Canadian meat giant announced its plans to open North America’s largest vegan protein factory, investing $130 million in a 30,000-square-foot facility in Indiana. It’s expected to be operational by late 2020.

“This will support our rich pipeline of innovative products that both satisfy increasing consumer demand and drive our continued leadership of this dynamic category in the U.S. and Canada into the future,” said Dan Curtin, president of Lightlife and Field Roast.

Lightlife is also now available in Canadian Walmart stores. According to a recent post on its Instagram, you can find its vegan bacon and chicken-style tempeh products in 300 locations across the country.