Lions in South Africa’s Kruger National Park have been spotted snoozing on the park’s roads in the middle of the day. Normally, they would only be seen on the road at night, but because of the coronavirus lockdown, they’re getting a little more adventurous with where they choose to nap.

Park ranger Richard Sowry—an essential worker helping to keep the animals safe and guard against poachers—spotted the big cats last week. He took a photo of them sleeping from his car. He pulled up just five meters away.

“Lions are used to people in vehicles,” he told the BBC. “All animals have much more of an instinctive fear of people on foot, so if I had walked up they would never have allowed me to get so close.”

Roughly the same size as Wales, Kruger is one of South Africa’s largest and most-visited national parks. When it opened in 1927, it received less than 30 visitors. Now, nearly two million people descend on the park every year.

Due to the pandemic, the park has been closed since the end of March.

Lions and hyenas have also been spotted on the grounds of Skukuza Golf Club, located inside the national park. Some lionesses even paused to take a drink from ponds located along the course. 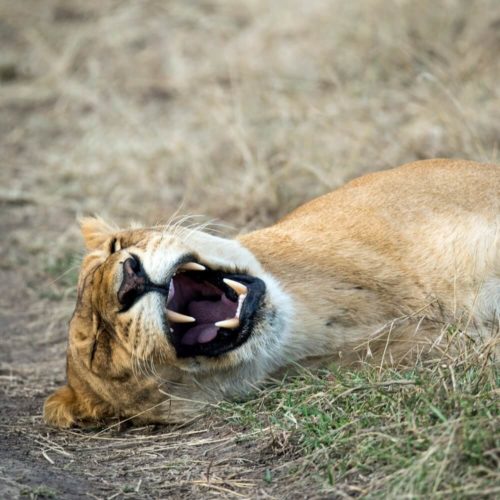 Lions normally sleep in the bush, away from the busy roads.

‘In the Absence of Humans, Wildlife is More Active’

According to the park’s media officer Isaac Phaala, the lions were sleeping on the road because it’s dry and they don’t like wet grass. He told CNN: “under normal circumstances, there would be traffic and that pushes them into the bush.”

“They just occupy places they would normally shun when there are tourists,” he continued. “People should remember that [Kruger] is still a largely wild area and in the absence of humans, wildlife is more active.”

Many countries have imposed lockdown restrictions as they try to get their coronavirus outbreaks under control. In New Delhi, monkeys have been spotted looking for food in normally bustling alleyways, now lined with closed shops.

In Llandudno, North Wales, normally shy mountain goats recently came down into the town to have a look around. They were spotted looking through windows, munching on garden flowers, and grazing on resident’s hedges.

“They are curious, goats are,” town councilor Carol Marubbi told the BBC. “I think they are wondering what’s going on like everybody else.”