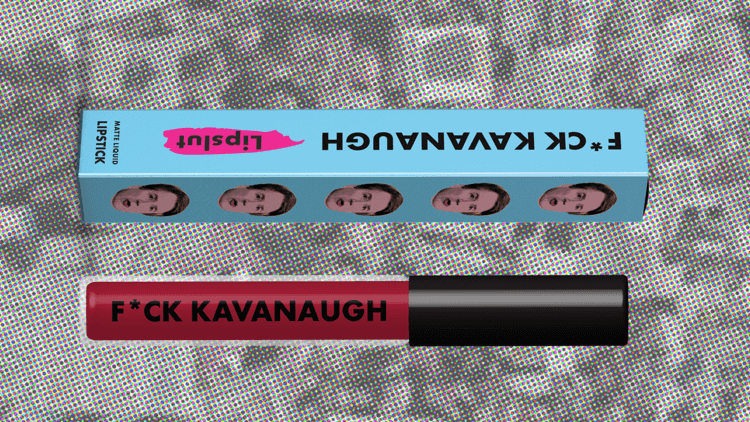 The new lipstick comes after last week’s divisive Senate Judiciary Committee hearings where Judge Kavanaugh was accused of a violent sexual attack more than 30 years ago on the then-teenager Dr. Christine Blasey Ford. Dr. Ford recounted in great detail how a drunk Kavanaugh along with another boy pushed her into a bedroom at a house party where Kavanaugh proceeded to lead the attack on her, attempting to rip off her clothes and cover her mouth with his hand when she screamed. Kavanaugh denied the accusations, attacking instead the timing of the probe and what he called an attempt by Democrats to thwart his confirmation to the Supreme Court as some sort of calculated revenge over Donald Trump’s election and even Kavanaugh’s role in the Kenneth Starr-led investigation into the Clintons.

Nominated by you, F*ck Kavanaugh matte liquid lipstick is a cool, calm, and collected deep red. 100% of earnings this week will go towards anti-sexual assault organizations. ? Link in bio ?

Politics aside, Lipslut uses its label to promote social justice issues. It may lead with the jarring product names, but the products do go on to support some notable causes. When it launched its F*ck Trump lipstick earlier this year, it raised more than $100,000 for campaigns working to help reunite families separated at the border as part of Trump’s anti-immigration policies.

In addition to its social justice ethos, Lipslut’s products are also cruelty-free and vegan made with coconut oil and vitamin E. It also comes with a reminder from the company, “as with every lipstick purchased comes an opportunity to vote,” it notes on the product page.

All proceeds from the sale of the F*ck Kavanaugh shade through October 7 will go to Rape, Abuse & Incest National Network (RAINN), No More, the National Alliance to End Sexual Violence, and End the Backlog.