The chain, in partnership with Impossible Foods, is currently testing its new vegan Impossible Supreme Pizza in three cities across the U.S. Locations include Ft. Meyers, Florida; Albuquerque, New Mexico; and Yakima, Washington according to Business Insider.

In contrast to comments made last month regarding Americans’ appetites for more meat, Ed Gleich, Little Caesars’ Chief Marketing Officer told the website, “You don’t just do it to be first … For us, there has got to be a business reason behind it.”

Although Impossible Foods originally pitched a pizza topped with its signature meatless burger, Little Caesars recognized the opportunity for something more novel. As most customers overwhelmingly choose sausage topped pizzas, the companies worked together to create the new offering.

The pizza itself isn’t vegan yet, however, CEO David Scriviano told Fortune “This is likely just the beginning of plant-based menu items from Little Caesars.”

Impossible CFO David Lee added, “Little Caesars had the foresight to recognize that the core of their meat-eating consumers would embrace an Impossible Supreme Pizza.” 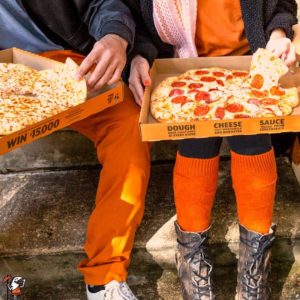 Though Little Caesars will exclusively launch the new Impossible Sausage, it isn’t the first establishment to feature meatless meat on its pies.

Earlier this year, Blaze Pizza introduced vegan chorizo to its menu, available at no extra cost. Developed in-house by Blaze’s Executive Chef Bradford Kent, the chorizo is available at all 300 locations.

Kent said of the launch, “We wanted to create a vegan protein option that could be enjoyed by all pizza lovers regardless of their dietary preference. That’s exactly what our new Spicy Chorizo offers. It’s flavorful enough to be the sole protein option on the pizzas, but also complements other veggies or meat toppings. We’re really fired up for guests to get a taste of it.”

Forbes reported in 2017 that the vegan-friendly pizza company was the fastest-growing restaurant chain ever. The chain is backed by athletes including LeBron James and Boston Red Sox co-owner Tom Werner.

The pizza will only be available for a limited time at restaurants in the three cities, with an initial launch of four weeks planned.