A new billboard in west London’s popular area of Shepherd’s Bush exposes the hard facts of the dairy industry and asks passersby to go vegan.

“TRASH. 95,000 male calves shot in a year – the dairy industry’s trash,” the billboard reads atop a photograph of a young cow with a tagged ear. “It’s time to go vegan.”

The message appears on a 7.5 meter-tall billboard and for two weeks, will be seen by Londoners and tourists visiting attractions such as Westfield London, the largest shopping center in Europe. It is estimated to reach 7.1 million people during its placement.

Prior to the billboard’s London launch, the same message appeared on two billboards in Birmingham. The promotions were placed on the M5 and were said to reach 1.6 million people during the two weeks they were up.

The promotion is part of the Scary Dairy campaign, led by animal rights charity Viva!. The aim of the campaign is to raise awareness about animal cruelty on British factory farms. One sector of the campaign, titled “TRASH,” highlighted by the billboards, focuses on the “forgotten victims” of the dairy industry: male calves. 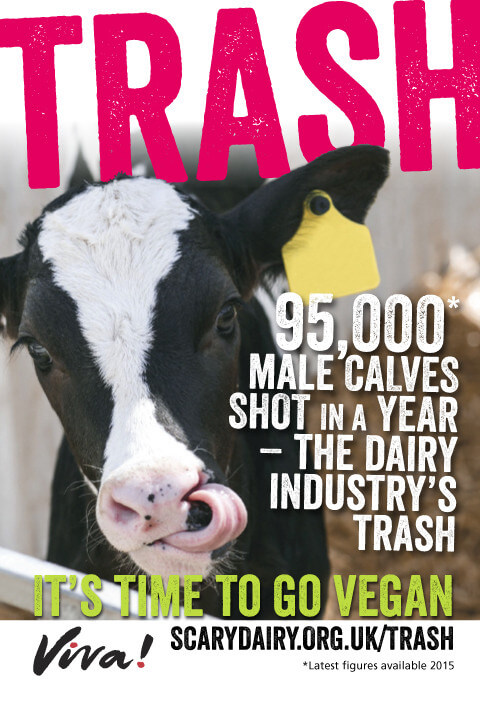 Dairy cows are artificially inseminated so that they become pregnant, give birth, and start producing milk. Calves are removed from their mothers within days (or sometimes hours) of being born, causing grief to both mother and baby. Female calves are placed in solitary hutches — “lonely, isolated and devoid of all contact and nurturing,” Viva! writes online — to later become milk-producing dairy cows. Male calves, considered an unprofitable by-product of the industry, are “shot in the head as trash” or sometimes sold for veal.

As well as the billboards, the TRASH initiative received its own YouTube advert, commissioned by Viva!. The emotional video, which shows a mother cow bonding with her calf before the calf is killed, is the first vegan YouTube advert to be shown in the UK.

Alongside the eye-opening project, Viva! reminds the public that countless plant-based and cruelty-free alternatives are available. The animal rights charity points out that it is simpler than ever for animal-lovers to enjoy all-vegan cheese, ice cream, yogurt, and milk, without the health, environmental, or ethical consequences of dairy.