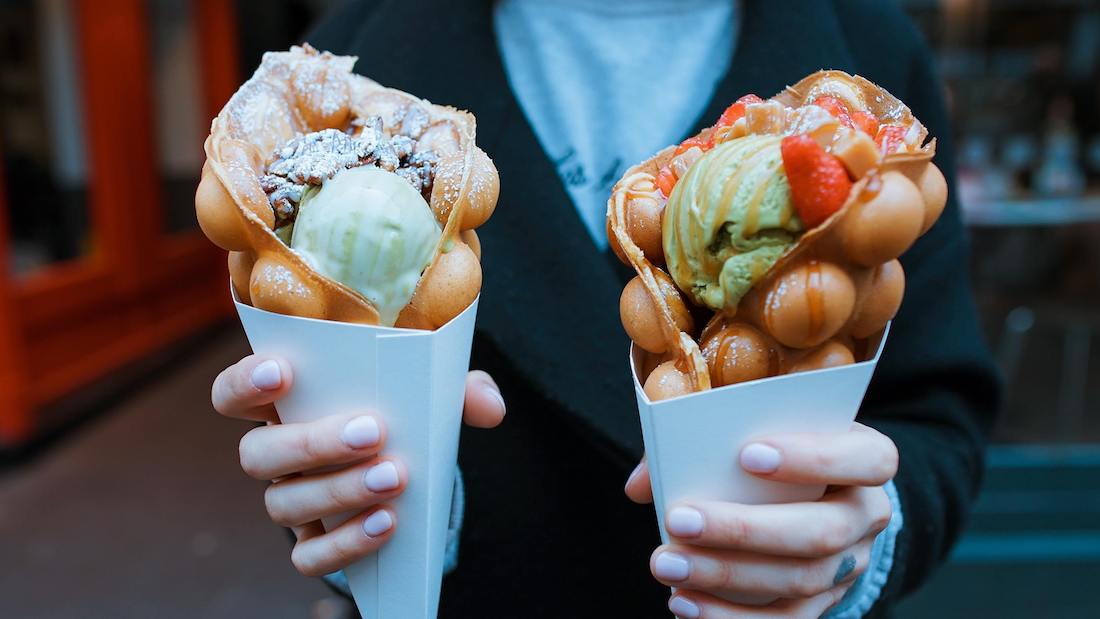 Also known as egg waffles, or gai daan jai in Cantonese, bubble waffles are a sweet street food whose origin dates back to 1950s Hong Kong. According to The Guardian, the original bubble waffle batter was comprised of broken eggs, flour, milk, and sugar. It was then cooked in a hexagonal waffle iron over charcoal. The result is a lightly sweet “waffle” with soft, puffed orbs (which is where the “egg” in “egg waffles” comes from) that’s crisp around the edges.

It wasn’t until recently that bubble waffle shops began cropping up in metropolitan areas in some English-speaking countries. Bubblewrap opened in 2015, and Eggloo followed in 2016. All shops serve their bubble waffles in a paper cone with a scoop of ice cream. Customers can choose toppings like fresh fruit, cereal, mochi, nuts, candy, and flavored syrup. Vegan bubble waffles are even more recent but welcome among anyone with a sweet tooth (or an Instagram account).

Bubblewrap owner Sunny Wu dedicates all of Friday to selling vegan bubble waffles. Rather than eggs, she creates a binder for the batter by combining ground flax seeds and water. Wu says that the plant-based version is nearly identical to traditional bubble waffles, only it is lighter and a bit sweeter.

Eggloo offers vegan bubble waffles daily. The option began at NYC’s Vegandale Food Drink Festival in fall 2017. After being bombarded with comments from fans who weren’t able to attend the event, Eggloo kicked off a special three-day offering in November 2017, where it served two vegan flavors. The event was such a success that it was repeated next month. Eventually, the East Village Eggloo shop made vegan bubble waffles a permanent menu fixture.

Bubble waffles aren’t the only vegan Asian dessert winning over western customers. Many mochi brands, such as Bubbies and My/Mo, are creating vegan versions of their products, which are now widely available in major grocery stores. Affordable grocery store chain Trader Joe’s even carries its own private label vegan mochi. Kakigori and other varieties of shaved ice desserts are also rising in popularity, while plant-based taiyaki, a fish-shaped pastry served stuffed with soft-serve ice cream, is gaining traction. The recent influx is likely related to the rising demand for vegan food among all consumers – vegan, vegetarian, and omnivore – who choose plant-based due to the health, environmental, or animal welfare concerns.