London-based purveyor of handmade doughnuts, Crosstown Doughnuts, has opened two vegan locations: a shop in the affluent London neighborhood of Marylebone and a stall in Brockley Market. The openings occurred within less than a month of each other, further adding to the growing number of vegan food options in London.

Reported by British Baker, the Marylebone location (Vegan Crosstown) is the only Crosstown location to stock all nine of the company’s vegan flavors daily, including special seasonal flavors like Coconut & Lime, Blood Orange, and the berry-filled Forest Fruit.

“Vegan Crosstown is an expansion of our current offerings that we’ve been working towards since we first introduced a selection of vegan doughnuts back in May 2017,” the company told British Baker. “We’ve been searching for the right location and hope that, with our new site opposite Selfridges on Picton Place, we’ve found a great central location that’s accessible to people living all over London.”

Spirulina sourdough with coconut filling & lime glaze on the top. Beetroot sourdough with a blood orange glaze & pistachio crumble in the middle. Cinnamon with vanilla bean glaze on the bottom. Three delicious new options as part of our vegan line up, made fresh every day ??✖️#vegancrosstown #vegandoughnuts #happycow #craftbycrosstown . . ? @thezestylime ??

Following the opening of Vegan Crosstown in late March, Crosstown Doughnuts opened an additional vegan doughnut stall at Brockley Market, a south London-based, award-winning food market that supports local vendors. According to Hot Dinners, the stall will serve all nine of Crosstown’s vegan flavors every Saturday starting at 10 am.

First opened as a market stall in 2014, Crosstown Doughnuts now operates multiple locations and pop-up market stalls in the London area. In May 2017, the company launched its vegan sourdough doughnut range to tie in with National Vegetarian Week. “We’ve spent months experimenting with different processes, techniques, and ingredients to adapt our doughnuts to be vegan-friendly without compromising on taste, texture or quality,” the website reads. “We want to move away from the misconception that vegan options aren’t as good as ‘the real thing’, and are excited to produce a vegan range of doughnuts for London that are every bit as delicious as their non-vegan counterparts.” 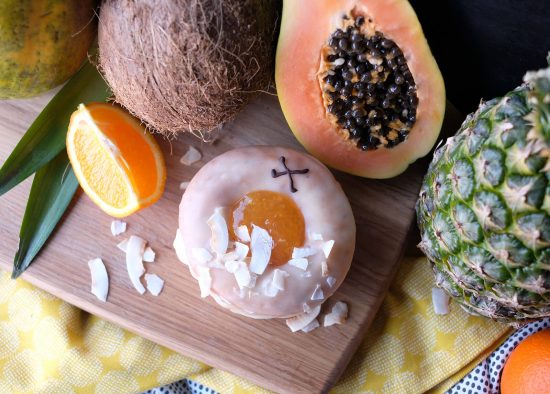 While Vegan Crosstown is not the first vegan doughnut shop in London (that title belongs to Dough Society, which opened in January), it is another quality addition to the plant-based food scene. Earlier this year, new data showed that the number of vegans living in the UK surged by 700 percent in just two years, meaning that vegans now make up 7 percent of the British population.