Bob Bob Ricard, an eccentric fine dining establishment in the Soho neighborhood of London, has added vegan options to its menu. The restaurant is known for its animal-heavy Russian comfort food and “press for champagne” buttons.

What’s on the Menu

Chef Eric Chavot wanted to provide options to entice more plant-based customers, but he also did not want to deviate from the theme of over-the-top luxury and elegance of the current menu. The new vegetable-centric dishes are thoughtful, refined, and seamlessly work into the current upscale offerings of caviar and steak tartare.

Along with a vodka shot (which is religiously served at -18°C) the impeccably-dressed diners can choose from a Waldorf Salad, Pearl Barley Kasha & Pickled Forest Mushrooms, and Tolma a La Tolstoy, which is a stuffed tomato dish with spiced chickpeas, grains, and tomato coulis. A Truffled Potato & Mushroom Vareniki (traditional Russian dumplings), Crushed Minted Peas, Roasted Carrots & Parsnips, and even Truffled French Fries are also vegan-friendly, among other sides and small plates. For dessert, the chef has created two plant-based sweet endings: Le Colonel, comprised of lemon sorbet served with vodka; and Rum & Raisin Rice Pudding, which includes premium rum, coconut, caramelized banana, and mango sorbet. Even if you’re not drinking that night, you’ll likely eat your alcohol at Bob Bob Ricard. 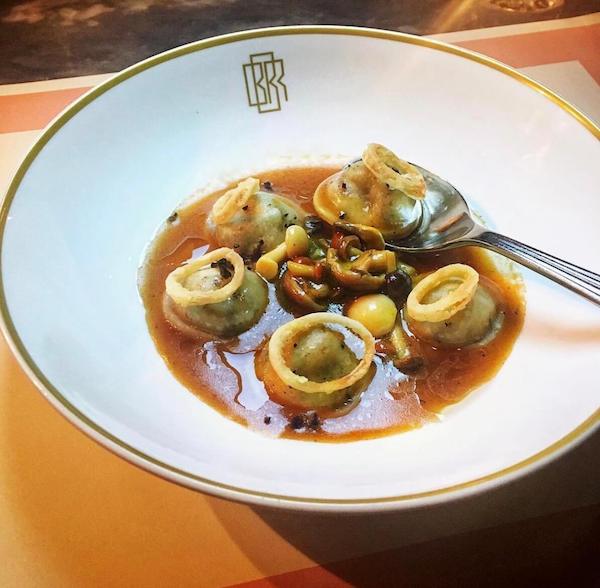 Although many restaurants in London have already expanded their vegan options following the mounting pressure from consumers, vegan cuisine is still relatively new to the fine-dining world. As Chef Chavot pointed out, he could not serve burgers and falafel, as these items would not be cohesive to the restaurant’s overall concept of refined elegance. However, truly great chefs love to get creative, and vegan cuisine may just spark their interest in producing something new, inventive, and absolutely divine.

Celebrity chef and serial entrepreneur Matthew Kenney is one of the pioneers paving the way in elevated plant-based dining. His vegan restaurant empire is impressive, with locations in Los Angeles, New York, Bahrain, Sydney, London, Sao Paulo, and more. What’s more, he recently partnered with Saudi Arabian Prince Khaled Alwaleed to launch a vegan hospitality group to further the idea of vegan cuisine in esteemed restaurants around the world.