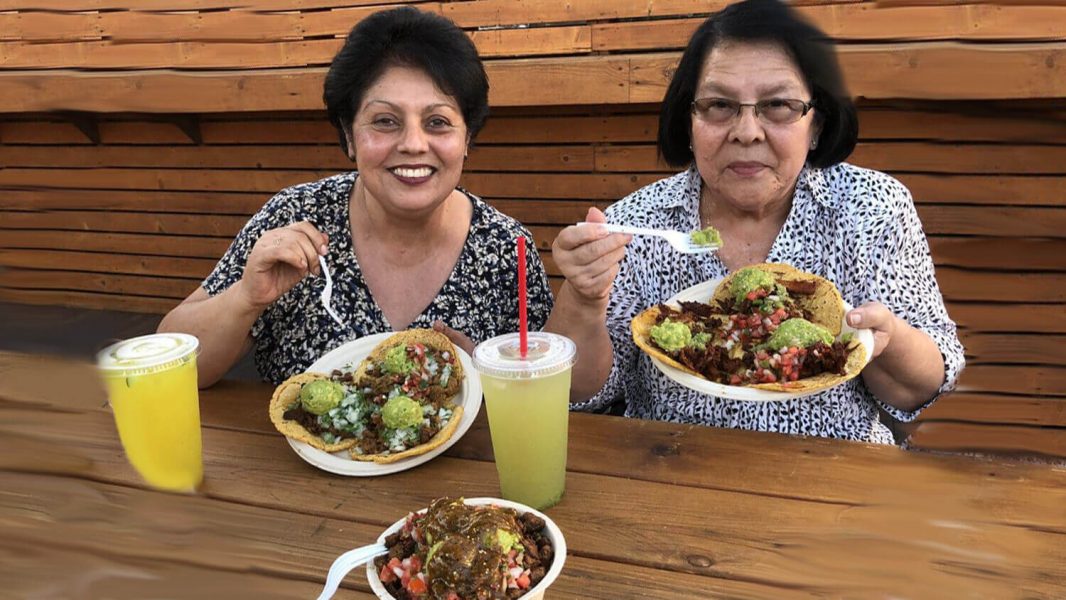 “As vegans, we would drive by and see the cena,” said Carmen Santillan, co-founder of the vegan Mexican pop-up, Cena  Vegan, speaking of the omnivore taco stands found throughout L.A. at night. “I thought, ‘That’s something we’re never going to have, to stand on the corner and have a taco.’ We’re happy being vegan, but it was something I missed.”

Launched in 2015 by Santillan, her husband Mike Simms, and friend Gary Huerta, Cena Vegan has since earned a loyal customer following. The pop-up serves meat-free versions of popular dishes like seitan al pastor, pollo asado, and barbacoa, all made with authentic Mexican spices and cooking techniques in order to recreate flavors and textures that resonate with the local foodie community.

Damn! ? I love when people bring their reusable containers in. This one was quite the big one fitting our Plantain Picadillo Nachos, Guava Cheese Strudels, Meat Pie and room for @avocadamama yummy mac. See y’all this Sunday @smorgasburgla 10AM-4PM for the Record Fair with DJs curated by @dublab. Photo by @avocadamama. ⛓#señoreata #vegan #smorgasburg #plantbased #veganfoodshare

“A lot of times what [vegan] companies do is they add cumin, and they call it Mexican food,” Huerta explained. “But there’s a lot of layering that goes into the food we grew up with. Having those traditional flavors again, it’s like an epiphany.”

Cena Vegan’s success has allowed for its founders to enter the retail market. Last May, Santillan, Simms, and Huerta launched four of the pop-up’s signature vegan meats in two Los Angeles plant-based grocery stores. It is now available in Organix, Lassens, and the Follow Your Heart Cafe.

Highland Park’s booming vegan Latino scene has also prompted some local vendors to adjust their menu in order to appeal to the more plant-forward crowd. David and Delmy Ramirez, owners of a Salvadorean pupusa cart, say they launched a vegan menu because their traditional meat-heavy options weren’t selling well.

“I wanted to find a good vegan taco de carnitas and I couldn’t find an affordable one. They were only at affluent vegan hipster spots,” chef Raul Medina, founder off Taqueria La Veganza, told NPR (National Public Radio) last July.