The low-sugar brand — created by U.S-based ice cream giant Breyers and owned by Unilever — hinted at the upcoming launch in the comments of an Instagram post earlier this year, simply responding to curious customers with, “we are launching a vegan range very soon.”

Now the company has revealed the flavor of the new dairy-free option: Chocolate & Hazelnut.

Breyers Delights was created by Breyers especially for the UK, where the health and wellness market has consistently grown over recent years. Each tub contains a maximum of 350 calories.

“The lower-calorie segment is growing fast and Breyers has been a key factor in the category’s success – it is one of Unilever’s most successful brand launches in ice cream in the last five years,” said Noel Clarke, the vice president for refreshments at Unilever UK, in a statement.

“To take it to the next level, we are introducing a new vegan-friendly flavour to open up the brand to even more consumers who enjoy a dairy-free diet,” he added.

Although there is currently no further update on what else to expect from the new Breyers Delights plant-based range, its low-calorie dairy options consist of a variety of creative flavors including Coffee Cupcake, Cinnamon Oat Cluster, and Salted Caramel Cake. In the U.S, Breyers offers two nondairy almond milk-based options: Vanilla Peanut Butter and Oreo. 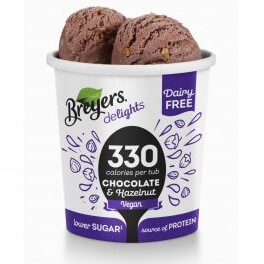 With the launch of its new vegan options, Breyers Delights joins the thriving vegan ice cream market which is set to surpass a value of $1 billion by 2024, according to recent data. In Europe, the projected CAGR (compound annual growth rate) of the market is more than 14 percent.