Kroger, the nation’s largest supermarket chain, has launched a vegan recipe contest in order to raise consumer awareness about plant-based food. The contest was announced in Live Naturally, a Kroger-exclusive magazine centered around organic eating and healthy lifestyle that is available at more than 1,400 Kroger and sister stores throughout the country.

Reinfeld is a chef for more than 20 years, a 2017 Vegetarian Hall of Fame Inductee, author of eight cookbooks, and the founder of Vegan Fusion, which offers vegan and raw cooking workshops, plant-based chef certification, and more. Krieger and Reinfeld will judge submissions.

Kroger is the largest United States supermarket chain by revenue and the second-largest retailer in the world behind Walmart. The company’s Simple Truth line includes several vegetarian and vegan options. Plant-based pantry ingredients such as beans and legumes, plant-based milk, nut butters, fresh produce, baking ingredients, and frozen fruit as well as eco-friendly household supplies, can all be found under the house brand. Last year, the company started carrying frozen products from Quorn, a company that specializes in vegetarian and vegan meats, in order to meet the growing consumer demand for plant-based meat and adding to the options for vegan food at Kroger. 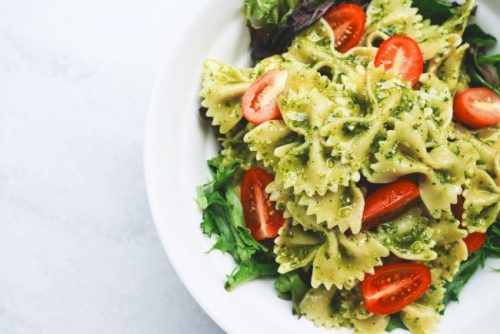 Kroger is far from alone in its efforts to build awareness around the benefits of eating plant-based. Target, for example, recently began carrying the vegan Beyond Burger, a plant-based burger that appeals to meat-eaters due to its realistic taste and texture. Recent data from leading market research company Neilson showed that plant-based food sales in grocery stores, drug stores, military stores, and mass merchandisers had risen by 8.1 percent in one year.

The grand prize contest winner will take home $1,000, a goodie bag with coupons for organic line Simple Truth, and have their recipe published in Live Naturally. Runner-up prizes include a Vitamix blender, a free membership to Mark Reinfeld’s Vegan Fusion Academy online course, the “Plant-Powered Families” cookbook, and more. Submitters must use ten ingredients or fewer in their recipe submissions and include a product from Kroger’s Simple Truth line. Contest submissions will be open until July 15.