If you don’t know what poke is, were you even awake in 2016? For those of you that didn’t hop on the trendy bandwagon two years ago, poke is a Hawaiian dish normally made of raw fish, typically yellowfin tuna.

In this recipe, fresh watermelon replaces tuna to create the ultimate vegan summer dinner.  Before you assume this is some weird vegan trade-off, hear me out. Although the watermelon sort of looks like the typical fish poke, that’s not why I chose it as the star of this dish.

Watermelon is in season (so it’s affordable and readily available) and it it absorbs flavor amazingly (ever filled a watermelon with vodka? #summermood). Here, it’s marinated with scallions, soy sauce, sesame oil, chili paste, rice vinegar, and sesame seeds. Allowing the watermelon to marinate in the sauce is essential to get the classic poke flavors really poppin’.

The end result is fish-free “fish” that’s mild enough in flavor to complement the dish, not overpower it. You can customize your poke bowl with toppings, or just eat it as-is. Try it with pickled ginger!

This is a super easy recipe and is sure to be enjoyed by both vegans and seafood lovers alike. If you try this recipe, let me know! Leave a comment, or share a picture on Instagram with #datkindlife 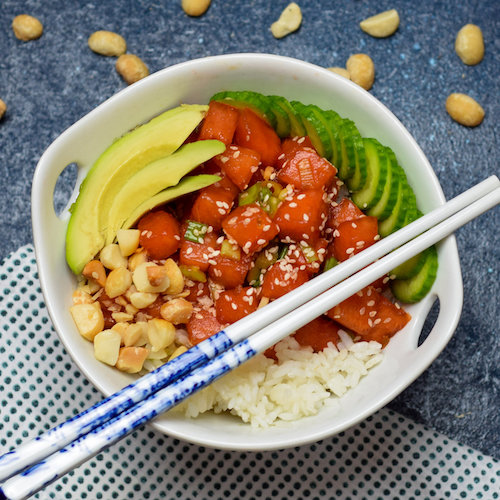 Looking for more vegan seafood recipes? This chickpea tuna salad is as simple as it gets, but that doesn’t mean the flavor falls short. All you do is mash up a can of chickpeas with vegan mayo, tamari, and kelp granules (which gives it a “fishy” flavor) and add a squeeze of lemon juice. Serve it with crackers or on bread — add a slice of dairy-free cheese and warm it up in a skillet to make a vegan tuna melt.

If you’re looking for something simpler, look for vegan fish in the frozen section of your local grocery store. There are plenty of options to choose from made by multiple brands, including Gardein, Good Catch Foods, Loma Linda, Quorn, and more.

This recipe was republished with permission from Dat Kind Life