By Hazel and Cacao
Jump to recipe

Make vegan pancakes or waffles with this buckwheat batter. This vegan breakfast recipe features mashed bananas in place of eggs.

I have been fiddling around with a buckwheat vegan pancake and waffle recipe for a while. I used to love having a gluten-free packet buckwheat pancake mix from time to time. But I always found it incredibly heavy and dense. Not only that but although the list of ingredients in the pancake mix was not altogether bad, I decided there were way too many ingredients in there for a simple pancake. Most of which were very starchy.

I really wanted to stick to buckwheat because I love buckwheat. Buckwheat is very easy on digestion, contains no gluten as is a seed, not a grain, is highly alkalizing and high in various vitamins, minerals, and plant-based protein. I’m actually always on the lookout for different ways I can get more buckwheat into my diet. It’s also one of the only “grains” that my mum can eat without it leading to heartburn.

So I came up with this and I am so glad I did because its so much lighter and actually tastes a lot more like a traditional pancake compared to the packet mix I have been having. The hardest thing about creating vegan pancakes or waffles is replacing the eggs. For me, I found that banana works great however it does give a banana flavour, which I love! For some reason, you can taste the banana more in the vegan pancakes compared to the vegan waffles. If you don’t like banana you can try replacing with applesauce. Hope you give this a try.

Make Vegan Pancakes or Waffles With This Buckwheat Batter 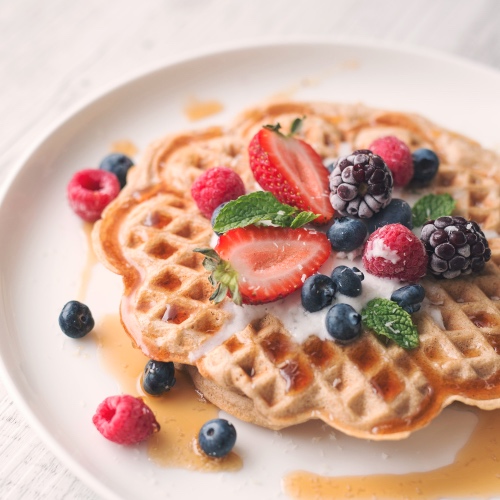 Looking for more delicious vegan breakfast recipes? Make my vegan veggie-packed chickpea omelette! Customize this eggless omelette with your favorite veggies like mushrooms, spinach, and black olives. You can also throw in dairy-free cheese shreds or your favorite plant-based meats.

You can also make my vegan peach and quinoa muffins for breakfast on-the-go. My recipe uses coconut yogurt as an egg replacement. These vegan muffins are perfect for a quick snack and even make a decadent dessert!